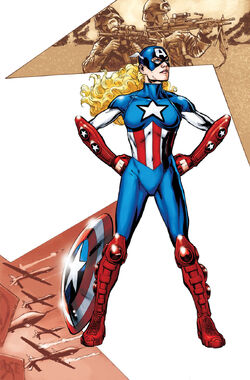 Shannon Carter is the cousin of S.H.I.E.L.D. agent Sharon Carter, who grew up idolizing Captain America. She got a job working as a tour guide for the Avengers Mansion.

When the new Avengers team was formed, she was invited to join. She had designed a costume, created disc weapons that looked like miniature versions of Captain America's shield, and underwent a lot of physical training to make herself as strong and as agile as humanly possible.

She joined the team as the "American Dream". Shannon soon proved herself to be worthy of Cap's colors, and when the team had to save the original Avengers from a dark parallel reality, she proved that she was worthy of his shield. The original Captain America gave her the alternate Captain's shield.

American Dream has fought against the Soldiers of the Serpent, Seth, Doctor Doom (Kristoff Vernard), the Revengers, Fatal Force, and Loki. She is not only a great fighter, but a great leader.

American Dream is in peak physical condition for a non-powered human.

American Dream is a world-class athlete and skilled hand-to-hand combatant and martial artist. She also uses Captain America's shield well (both defensively and offensively), and has terrific aim with her throwing disks.

American Dream has the strength of a woman of her height and weight who engages in extensive regular training.

Shannon still possesses the weaknesses of any ordinary human.

Like this? Let us know!
Retrieved from "https://marvel.fandom.com/wiki/Shannon_Carter_(Earth-982)?oldid=6076151"
Community content is available under CC-BY-SA unless otherwise noted.