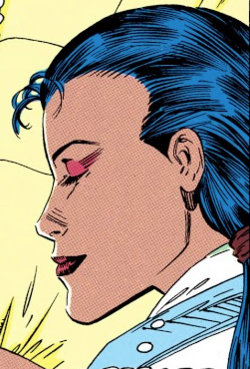 Sharon was working as a nurse when she was caught up in a battle between the New Mutants and the Demon Bear. She and Tom Corsi were magically transformed from being physically Caucasian to Native American.[1] Unable to explain their new bodies, Sharon and Tom resided at the Xavier Institute and joined the school staff. Sharon acted as the school nurse.[2]

After the Mansion was destroyed during "Inferno", Sharon and Tom relocated to Muir Island and assisted Moira MacTaggert. They participated in the defense of the Research Center from an assault by the Reavers.[3]

Much later, Sharon and Tom went undercover at a private school to supervise a latent mutant. When the Acolytes attacked the school in search of the youth, Sharon then sent a desperate S.O.S. to the X-Men. Her allies received the message and came to her aid, but the Acolyte Joanna Cargill had already killed Sharon.[4]

Sharon possessed increased speed and reflexes after her transformation.

Sharon had increased strength due to her transformation by the Demon Bear, though it was not classified as super strength.

Like this? Let us know!
Retrieved from "https://marvel.fandom.com/wiki/Sharon_Friedlander_(Earth-616)?oldid=5691734"
Community content is available under CC-BY-SA unless otherwise noted.