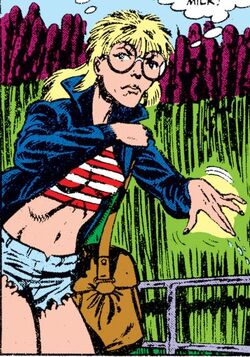 Sharon Selleck was friends with fellow aspiring actress Julie Angel. Angel had an association with the Fantastic Four through her former roommate Frankie Raye who was dating the Human Torch at the time. When Frankie became a herald of Galactus, Sharon replaced her as Julie's roommate. [1] While working at TV City, Sharon was part of the TV crew that filmed Barbara Walker's interview with the Invisible Girl on the "Woman to Woman" television show. [2] She later met the Torch when he began attending acting classes with Julie, in a failed attempt to begin dating her. Johnny remained oblivious to the fact that Julie was interested in Grey Landers, a fellow classmate, and the fact that Sharon developed an instant crush on Johnny. [1] Sharon began pushing Julie to see Johnny again. But when they attempted to reach him at the Baxter Building they were rudely brushed off by who they thought was the receptionist, but in reality it was the Negative Zone ruler known as Annihilus who was attempting to destroy both his anti-matter universe and that of Earth. [3] When Julie and Sharon went to investigate the matter, they were halted by a barrier that Annihilus placed around the Baxter Building. Eventually the Fantastic Four returned home and defeated Annihilus. [4] Later, when Johnny began hunting for an apartment, Julie and Sharon accompanied him on the search. After successfully finding a loft apartment, the trio celebrated by having dinner with Johnny and their friend Norm Tobin. [5]

Later, Sharon was on her way to a gig with her band the Rolling Dead when he car broke down in the town of King's Crossing. There she stumbled upon a bizarre locals who had mutated into xenophobic shapeshifters by milk taken from a group of Skrulls turned into cows. Unsure of what she had uncovered, she found the locals less than inviting and they constantly impeded her attempts to try and get out of town. Her meals tainted with Skrull milk, Sharon's allergy to dairy products began to flare up. Failing to call Julie for help, Sharon managed to flee the locals to a nearby payphone and try and get a call to the Fantastic Four, but she was recaptured. However, because of he frantic phone calls, Julie was able to get ahold of the Fantastic Four who went to investigate. There they uncovered the bizarre plot, stopped the mutated farmers and freed Sharon. [6]

Back in New York City, Sharon visited Johnny at his new apartment and tried to make a move on him. He rebuffed her advances due to his continued interest in Julie Angel, then he left due to an emergency before Sharon could explain him of Julie's interest in a different guy.[7] Sharon tried again to win Johnny over, but failed to do so as Johnny gave up on Julie and began pursuing Alicia Masters instead. [8] Sharon dropped from sight shortly thereafter, her current activities are unknown.

Sharon is allergic to dairy products. [6]

Like this? Let us know!
Retrieved from "https://marvel.fandom.com/wiki/Sharon_Selleck_(Earth-616)?oldid=6438721"
Community content is available under CC-BY-SA unless otherwise noted.