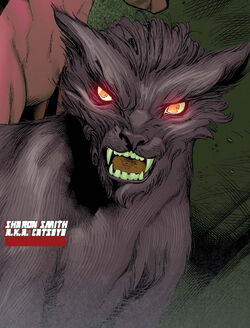 Catseye was abandoned at birth by her parents, and was raised by a cat,[1] influencing her behavior, and causing her to maintain her cat form. She was found by Emma Frost who convinced her of her mutant nature, and was made a member of the original Hellions team, intended to be a competing team with the New Mutants and a tool for the Hellfire Club.

Emma Frost became a mother-figure for Catseye,[1] and made her get used to her human form again.[2]

Her power was the antithesis of Wolfsbane who could transform into a wolf. Catseye engaged in several battles with the New Mutants, mostly petty competition, but with her teammates she occasionally got along with their opposite numbers, sometimes even holding dances together for socializing.

Catseye's personality was that of a free spirit. Catseye's youth and comparative lack of sophistication belied a ferocious intelligence. She was capable of total recall from her photographic memory, and instinctively knew when she was being lied to. Under Frost's tutelage, Smith progressed from total illiteracy to upper grade school reading levels in less than a year. She still retained several feline qualities whilst in human form, having been forced to provide for herself since her earliest infancy. Catseye more resembled a carefree child in tune with the environment around her. Upon her first meeting with Wolfsbane, rather than attack out of an animal nature, she smelled Rahne and said that the two of them shared a kindred spirit and that they should be friends — this was in spite of the obviously played feline/canine feuding roles.[3]

When the New Mutants were in a state of emotional turmoil over being killed and resurrected by the Beyonder, Emma Frost saw it as her opportunity to sweep in and take control. She convinced Magneto — the then leader of the team — to allow the New Mutants to move to the Massachusetts Academy for psychic counselling, where she promptly accepted them into the ranks of her Hellions. Catseye shared a room with Rahne and the two of them became close friends. The two teams became quite fond of one another, but were separated when Magneto realized that his emotions had been manipulated by Empath to convince him to relinquish his students.[4]

Soon after, Emma threw another party which the Hellions as well as the X-Men's Gold team attended. It was there that Trevor Fitzroy — a member of the villainous group known as the Upstarts — crashed the party with the goal of killing Emma in order to gain points within the group for killing influential mutants. The Hellions were mere formalities for Fitzroy: some were killed in the crossfire and the rest, including Catseye, were drained of their life energies in order to fuel Fitzroy's teleportation portal.[5]

Catseye, along with all of the other deceased Hellions, was resurrected by Selene and Eli Bard using the Transmode Virus.[6] She and the Hellions launched an attack on Utopia,[7][8] but they were all killed by the New Mutants.[9]

Following the foundation of a mutant state in Krakoa by the hand of Charles Xavier and his allies, Sharon resurfaced as a citizen of the nation, having been presumably reborn by the hand of The Five, a group of mutants capable of combining their powers into a process of resurrection, brought together by Xavier as part of his plans for mutant ascension.[10]

Ailuranthropy: Sharon had the ability to transform herself into a lavender-furred feline humanoid. She can transform into either a house cat, a large panther, or a human-panther hybrid (a were-cat). She was still able to speak when in her hybrid and animal forms. Her hybrid and panther forms are more powerful than her human form, displaying;

Catseye retained her human intelligence while in her feline form. She possessed a photographic memory, and was able to tell when she was being lied to. She also had some ability in hand-to-hand combat.

In human form she possesses normal human strength of a woman of her age, height, and build. In feline form her strength is roughly equal to a large tiger's. As an adult her strength in this form will be greater.

It was stated in earlier New Mutants stories that Catseye may in fact be a mutant cat with the power to assume human form, explaining why she found human speech difficult and appeared to be more "animalistic" in character.[citation needed] It was later revealed that she was a human mutant abandoned at birth and raised by a cat.[1]

Like this? Let us know!
Retrieved from "https://marvel.fandom.com/wiki/Sharon_Smith_(Earth-616)?oldid=6420380"
Community content is available under CC-BY-SA unless otherwise noted.