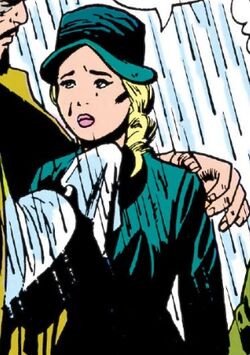 Sharon Xavier was the wife of wealthy nuclear researcher, Dr. Brian Xavier they lived together at the Xavier Mansion in Westchester County New York.[1]

When she became pregnant the fetus developed as twins one was Charles Xavier and the other Cassandra Nova a "Mummudrai", the spirit that is the equal and opposite of a person. While gestating in Sharon's, womb, Cassandra was recognized by Charles as an evil presence, and he preemptively tried to kill her with his nascent psychic abilities. Cassandra was barely able to defend herself and the shock of the roiling battle caused Sharon to have a miscarriage.[2] Though the doctors pronounced her stillborn,[3] Cassandra in fact survived and spent the next decades as a growing mass of cells in a sewer wall, building a new body for herself and planning her revenge on her brother.[2]

After Dr. Xavier's death in an accident, his colleague, Dr. Kurt Marko, whose son by a previous marriage, Cain Marko, bullied the young Charles, subsequently provided comfort to Sharon, eventually convincing her that her son needed a father to take care of him. Against Charles' wishes, the two were wed and Dr. Marko suddenly becoming a very wealthy man, due to the vast amounts of money left to Sharon by her late husband. Sharon married Dr. Marko because she believed that it would be best for Charles, but he spent most of his time away from his new wife and stepson.[1]

Charles' telepathic powers began emerging when he was still a boy, around ten, and, as he grew older, he learned to control them. With his powers, Charles had discovered that Dr. Marko cared only about his mother's money, admitting that he was jealous of Dr. Xavier's wealth. Dr. Marko quickly grew neglectful of Sharon, driving her to alcoholism, and abused both Sharon and Cain. Charles would link his mind to his mother's, in a effort to share the abuse with her and alleviate it. Sharon died shortly thereafter, of a broken heart, leaving Charles to live with his step-father and abusive step-brother.[1]

Later, a fight erupted between Cain and Dr. Marko, that caused some of Dr. Marko's lab equipment to explode, killing Dr. Marko. Sharon's son, Charles, would become a professor and use the considerable amount of inheritance and the family estate to found the X-Men, a group of young mutants taught to use their powers for the benefit of mankind and fighting for the peaceful co-existence of the two races.[1]

Like this? Let us know!
Retrieved from "https://marvel.fandom.com/wiki/Sharon_Xavier_(Earth-616)?oldid=5394050"
Community content is available under CC-BY-SA unless otherwise noted.