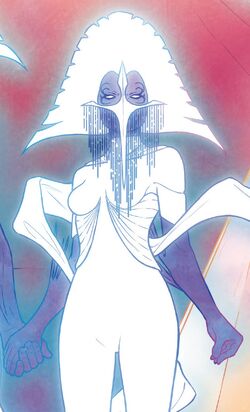 One of the two chief deities of the Shi'ar. According to Shi'ar mythology, she and her husband K'ythri created the universe. Before their union as husband and wife, Sharra and K'ythri were enemies, but were later forced into marriage. In doing so, they found strength and love. As a symbol of their love, K'ythri presnted Sharra the M'kraan Crystal on their wedding day.[1]

K'ythri was worshiped for untold millennia before being killed by Amatsu-Mikaboshi.[2] However, she has apparently returned to life along with K'thytri.[3]

Due to the manipulations of Loki, Sharra and K'ythri were convinced they needed to force the new Thor to take part in a Challenge of the Gods againt them to prove their superiority,[4] a challenge that consisted of numerous labors to prove the might of a god and their influence on their worshippers.[5] Even though K'yrthi and Sharra outscored Thor, mainly due to their disposition to cause mass suffering in order accomplish certain goals, the challenge's officiate Shadrak declared Thor as a winner, giving her extra points due to her unparalleled ability to inspire other gods, the Asgardians, to fight in her defense.

In light of their loss, Sharra and K'ythri called upon the Phoenix Force to have it lay waste to all of reality.[6] With the help of Quentin Quire, Thor appeased the Phoenix Force. For their reckless disregard of divine law, Sharra and K'ythri were arrested and taken to Omnipotence City in order to face punishment. Shadrak expected they'd have to serve a few centuries of confinement.[7]

Like this? Let us know!
Retrieved from "https://marvel.fandom.com/wiki/Sharra_(Earth-616)?oldid=6509076"
Community content is available under CC-BY-SA unless otherwise noted.