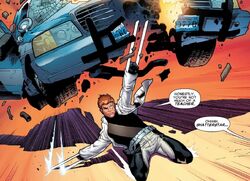 Shatterstar's weapon of choice are his customary two single-edged swords with spiked hand-guards. Both of these swords were forged from science and magic in Mojoverse.[1]

The swords can slice through highly durable materials such as the moorings on Juggernaut's helmet, and both of the swords are equipped with a bio-electric current to make them difficult for others to wield.[2]

The appearance of Shatterstar's sword(s) has changed from various issues. Here are some of these alternate versions;

Retrieved from "https://marvel.fandom.com/wiki/Shatterstar%27s_Swords?oldid=5208070"
Community content is available under CC-BY-SA unless otherwise noted.