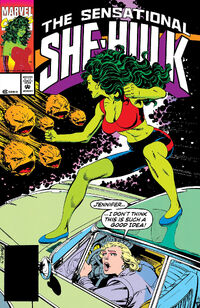 When She-Hulk attempted to rescue the Starblazer (NASA's first faster-than-light space craft), she ended-up being stranded ten thousand light years away from Earth. To help She-Hulk return home, the alien Al and Ulysses Archer (US Archer) modified a '59 Dodge with flight. [1]

The car was only capable of one interstellar flight, which aided She-Hulk in returning to Earth. The car was also equipped with a recall system (traveling via space-warp) so that it could be brought back to Al for servicing if there was a problem. [1]

Retrieved from "https://marvel.fandom.com/wiki/She-Hulk%27s_Flying_Car?oldid=4538986"
Community content is available under CC-BY-SA unless otherwise noted.