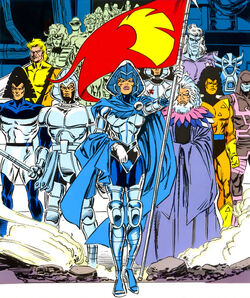 Sharra and K'ythri are the gods in marriage. The gods who didn't want to marry, but were forced into it. In marriage they found strength and in strength they found love. That's what the Shi'ar Imperium does. It marries other cultures. Shotgun weddings.

The Shi'ar are an avian-descended humanoid race of extraterrestrial beings that hail from the planet Chandilar, located in the large Shi'ar Galaxy. They are technologically advanced and extremely militaristic, conquering every world in their galaxy and forming the Shi'ar Empire.

Close to to humans, the Shi'ar have specific biological and physiological features.

Though the empire grew to include hundreds of thousands of different sentient species and worlds, the Shi'ar race controlled and governed the empire. Its central base of power was located on the "throneworld" Chandilar,[5] while the Shi'ar homeworld was called Aerie (it is unknown if the planets are distinct, or their "Terra" equivalent).[6] The leader of the empire was given the title Majestor (male) or Majestrix (female) and was a hereditary position, occupied by members of the royal family of the Shi'ar. The Neramani family was the most recent to represent the royal bloodline.[citation needed]

Not all races had the same rights in the Imperium, as the Shi'ar appeared to have a disproportionate influence on its governance.[citation needed]

It was nominally ruled over by a high council, which had representatives from a large majority of the alien races that existed within the Imperium. However, in practice, the head of the council (the Majestor or Majestrix) exercised strong executive control and could institute policy virtually by decree.[7]

The Shi'ar Empire was one of the most advanced and expansive civilizations in the universe, spanning entire galaxies. It was mainly an economic co-operative, where trade with other galactic powers was its driving force.[citation needed]

The leader of the empire was protected by his or her own personal guard, the Imperial Guard, which was made up of the most powerful and elite soldiers from throughout the Empire, and led by a praetor. The military itself (outside of the Imperial Guard) consisted almost exclusively of Shi'ar personnel, at least in most of the command positions.[citation needed]

Though having warlike and militaristic ancestry, the Shi'ar Empire largely occupied the role of peacekeepers in many interstellar affairs. For example, Empress Lilandra Neramani tried to broker peace between the Kree Empire and the Skrull Empire to help bring an end to their devastating war, she sought interstellar accord when deciding how to end the threat of the Dark Phoenix, and attempted to avenge the destruction of Tarnax IV, the Skrull throneworld, by Galactus.[citation needed]

However, it should also be noted that Empress Lilandra was personally responsible for authorizing the use of the Nega-bomb weapon, devastating the Kree Empire during Operation Galactic Storm, and that the Shi'ar were pivotal in the invasion and containment of Earth during the Maximum Security event. One of the latest atrocities committed by the Shi'ar was ordering the extermination of Jean Grey's family, in an effort to quell any future conflicts with the Phoenix entity.[citation needed]

Please find the alternate realities Shi'ar on this page.

The average Shi'ar can lift 1 ton in earth-like gravity and has far greater stamina. Most Shi'ar have no other special abilities, though some are genetic throwbacks. These individuals possess wings which allow them to fly.

Superhuman, at least 1 ton with intensive exercise.[8] According to Wasp, Shi'ar aren't stronger than humans.[9]

Since their blood does not generate its own heat, Shi'ar can not survive long in the cold.

Highly advanced, with warp-drive starships, and Stargate space-warping technology that allows for instantaneous travel between galaxies. Very Advanced; According to Beast, the Shi'ar Empire is a "highly advanced type 5 space civilization",[10] presumably on the Kardashev scale.

Like this? Let us know!
Retrieved from "https://marvel.fandom.com/wiki/Shi%27ar_(Race)?oldid=6151631"
Community content is available under CC-BY-SA unless otherwise noted.