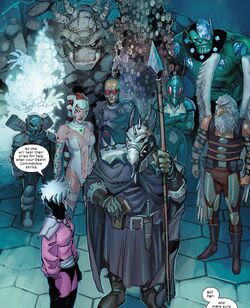 The Death Commandos were an elite off the books black ops squadron working for the Shi'ar Empire. They were all created through special experiments and are criminals to the public eye and often from enemy species. Unlike the regular Imperial Guard, they are all unique except Black Cloak who is always an exguardsman.[1]

They were first seen sent to eliminate the Grey Genome. They succeeded in killing all except Rachel Grey and Cable (although it's debatable how he fits into the Grey line, since his mother was a clone of Jean Grey). They then attempted to destroy Rachel after she had sneaked away from the Institute, but the X-Men and one of the O*N*E sentinels arrived in time to help her.[2]

During the War of Kings, Gladiator believed that Lilandra was murdered by the Death Commandos (it was in fact a raptor in Darkhawk armor). Gladiator hunted down Black Cloak and his superiors and engaged Black Cloak in combat. Black Cloak actually managed to hold his own against the enraged Gladiator and had gained the upper hand and was about to kill him when Rachel Summers arrived with the Starjammers and used her powers to explode his head, killing him in revenge.[3]

Following the death of Black Cloak, a second one replaced him on the team. Meanwhile, Xandra Nermani was being trained to take the throne of the Shi'ar Empire and requested to see her aunt, Deathbird. However, Oracle saw Deathbird as a threat and sent the Death Commandos to kill her and her escort, the New Mutants. Flaw, Hypernova, and Offset were all killed immediately after boarding the escort vessel by Magik and Devo, Krait, and Shell were defeated, which led to Black Cloak ordering Warshot to destroy the ship.[1] They then captured the New Mutants and while Black Cloak tortured them, Deathbird ambushed them and killed both Warshot and Black Cloak.[4]

Retrieved from "https://marvel.fandom.com/wiki/Shi%27ar_Death_Commandos_(Earth-616)?oldid=5946249"
Community content is available under CC-BY-SA unless otherwise noted.