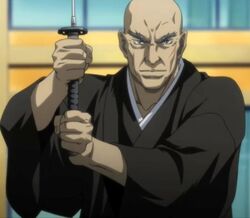 Shingen Harada was the leader of the Kuzuryu, an infamour Japanese criminal organisation that has close bonds with A.I.M..[1]. He was feared as a ruthless leader with no tolerance for failure.

For years, he had plans to get a foothold on Madripoor to use it as a base of operation. Years ago he allied himself with Juo Kurohagi, one of the two main leaders of Madripoor. He even sent his top assassin, Miyuki, to kill Juo's main rival, Koh.[2]. When Miyuki instead fell in love with Koh's son and bodyguard Kai, Shingen killed both of them.[3][2].

After Juo's death, Shingen decided to make Madripoor his by promising his daughter Mariko Yashida to Juo's son Hideki, the new owner of Madripoor.[1] When Logan infiltrated the Harada house to get her back, Shingen engaged Logan in a fight with wooden swords, and gave him a serious run for his money despite Logan's healing factor giving him an advantage. Shingen won the fight when Hideki drugged Logan with a poison, though he berated Shingen for interfering in what he considered a private fight.[3] Nevertheless, he ordered his men to dispose of the unconscious Logan, which failed due to the timely intervention of Yukio.[3]

When Logan attacked a ship transporting synthetic drugs that Hideki planned to give to Shigen as a dowry, the Public Intelligence Security Agency was able to gather the proof they needed that Shingen was a criminal. Knowing he was no longer safe in Tokyo, Shingen decided to go to Madripoor with Hideki and Mariko.[4] When Logan attacked the Dragon Palace along with Koh and his gang, Shingen confronted Koh and Yukio, killing the former. He then stopped Logan from killing Hideki and engaged him in a final fight for Mariko.[5] This time, Shingen used a real sword and put on protective armor to give himself an advangage.[6] After another lengthy battle, during which Shingen fatally injured Yukio, Logan finally managed to overpower and defeat Shingen, after which he allowed Yukio to deliver the killing blow.[6]

Peak to possibly superhuman physical ability for a man his age and weight who engages in intensive regular exercise.

Vibranium-Steel Armor: Shingen's armor can withstand even Wolverine's claws, and allows him to rip his opponents to pieces with his bare hands.[6]

Like this? Let us know!
Retrieved from "https://marvel.fandom.com/wiki/Shingen_Harada_(Earth-101001)?oldid=6289302"
Community content is available under CC-BY-SA unless otherwise noted.