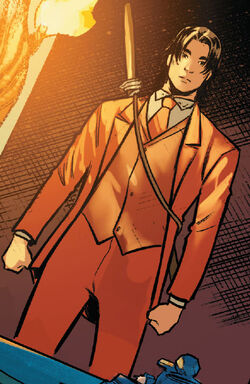 Shinobi Shaw was the illegitimate son of Sebastian Shaw. Rejected and abandoned by his father at an early age, Shaw was suspected of having attempted to assassinate him in Interlaken, Switzerland. Shinobi inherited his father's business and wealth. Apparently believing to have succeeded for a time, Shaw tried to take control of his father's empire and his network of social and political connections, including his position as a leading member of the Hellfire Club's Inner Circle.[1]

Shaw was also a member of the Upstarts, a group of young mutants organized by the mutant Gamesmaster who wanted to lead the next generation of would-be conquerors. Shinobi received "points" for killing his father.[2]

Shaw attempted to revive the Hellfire Club's Inner Circle with the X-Men known as Archangel and Psylocke, who refused his offer.[1] Shaw's next contest with the Upstarts involved assassinating the surviving New Mutants and Hellions, but was thwarted by the combined effort of X-Force and the New Warriors.[3]

Although Shaw briefly managed to obtain the assistance of several mutant associates, his frequent violent conflicts with other superhumans ultimately resulted in his failure to establish himself as his father's successor. Once he learned that his father was alive, Shaw, presumably in fear of retaliation for his assassination attempt, deserted all of his inherited positions and returned to a more secretive mode of life.[4]

As a result of the Scarlet Witch's actions, nearly all of the mutants in the entire world were stripped of their powers. Shinobi was among the 198 mutants cataloged to have retained their powers.[5]

Shinobi was eventually killed by his father.[6]

Along with many other deceased mutants, he was resurrected by Selene and Eli Bard with the Transmode Virus.[6]

He later returned to life through unknown means. He rejoined the Upstarts and together they killed the Nasty Boys to lure out the X-Men. When he discovered they were unknowingly working for the Black King, he used his mutant powers to phase his hand through his head, killing himself.[7]

Shinobi was once again resurrected by the Five in Krakoa after his father requested them to do so. Shinobi was resurrected with no knowledge of how he last died, so his father used that to make him his Black Bishop and use him against the Red Queen and White Queen by telling him his adversaries were the ones that murdered him.[8]

Shinobi Shaw is a mutant who displayed the following abilities:

Molecular Density Manipulation: Shinobi Shaw has the ability to alter the density of his own body. He can lower his body's density, making him intangible, allowing himself to pass through solid objects of organic and inorganic nature. He can also heighten his body's density, making him diamond-hard, providing resistance to injury. Shinobi is also able to phase a body part (such as his hand) into the body of another person and increase the density, causing great physical damage.

The O*N*E considered him a Significant Threat.[5]

Shinobi Shaw possesses the normal human strength of a man his age, height, and build who engages in moderate regular exercise.

Like this? Let us know!
Retrieved from "https://marvel.fandom.com/wiki/Shinobi_Shaw_(Earth-616)?oldid=6052857"
Community content is available under CC-BY-SA unless otherwise noted.