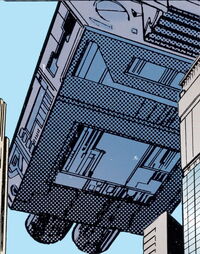 The Ship's history is seemingly the same as its Earth-616 counterpart until Legion went back in time to kill Magneto but accidentally killed his father Professor X instead. This caused the reality of Earth-295 to be created.[1]

The Ship was first seen flying over Cape Citadel as Apocalypse's Horsemen as take it over so they could seize control over its nuclear weapons and used them to wipe out humanity. When the X-Men thwart the scheme, Apocalypse used the Ship's weapons against them. Magneto was able to use his magnetism form a barrier to to protect himself and the X-Men.[2]

The mutant Sunfire was captive aboard the Ship and tortured by Apocalypse's Horseman Maximus aka Death. Sunfire eventually got free and used his powers to kill Maximus as well as destroy the Ship.[4]

The Ship later turned up seemingly rebuilt (or a replica was created of it was created) and used by members of the Human High Council to flee Earth.[5]

Retrieved from "https://marvel.fandom.com/wiki/Ship_(Earth-295)?oldid=4354898"
Community content is available under CC-BY-SA unless otherwise noted.