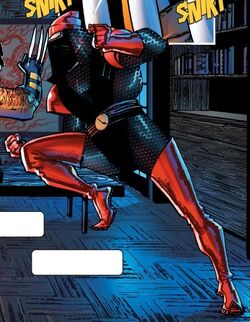 When Phaedra resurrected Wolverine as an agent of the Hand and Hydra, she kept a sliver of his soul for herself and cast it into a second form. This body became her agent known as Shogun. He was killed by Wolverine who then had his soul rejoined by the Angel Azrael.[1]

Like this? Let us know!
Retrieved from "https://marvel.fandom.com/wiki/Shogun_(Earth-616)?oldid=5658007"
Community content is available under CC-BY-SA unless otherwise noted.