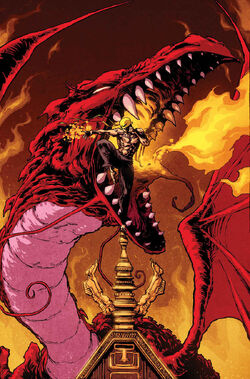 Shou-Lao was an immortal dragon who became the source of the power of K'un-Lun. During a performance of the dragon riders of K'un-Lun for the entertainment of its Yu-Ti, Shou-Lao went berserk and attacked the city's leader. He was slain by Quan-St'ar, who cut out the dragon's heart. Enraged at this, Yu-Ti banished Quan-St'ar from the city and revived the dragon by melting its heart and placing it in a sacred cavern.[1]

From this moment, each Iron Fist had to accomplish the final test of defeating this dragon in order to absorb part of its power. He was reborn over 66 times.[1]

Approximately 1,000,000 years ago, Fan Fei was brought for execution by Shou-Lao for breaking a forbidden rule of K'un-Lun by teaching their traditions to cavemen, who were also brought to be executed. All of them died except Fan Fei who killed the sacred dragon with her bare hands and claimed her name as Iron Fist.[2]

In modern days, Danny Rand defeated the dragon, and in the course of the battle had the dragon-shaped tattoo burned on his chest. After defeating Shou-Lao he plunged his hands into the brazier containing the dragon's immortal heart and it charged him with the power of the Iron Fist.[3][4]

When Cyclops and the X-Men were fighting the Avengers in K'un-Lun, Hope and the Thunderer came riding upon the dragon Shao-Lao, who blasted Cyclops with its fire. Unfortunately, the dragon was far too young to put up a fight and its riders were dislodged. However, Hope was able to unleash a combination of dragon energy, fire, and chaos magic to banish Cyclops to the Moon.[5]

Shou-Lao had the ability to breathe fire. Also, he could strike at lightning fast speeds.

If the dragon-shaped scar on his chest was covered he would die.

Like this? Let us know!
Retrieved from "https://marvel.fandom.com/wiki/Shou-Lao_(Earth-616)?oldid=6478595"
Community content is available under CC-BY-SA unless otherwise noted.