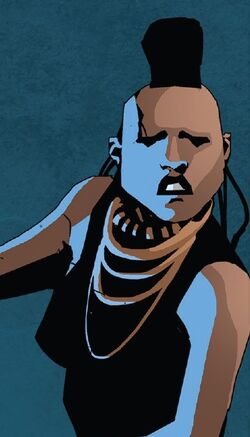 Shuriri was the technologically adept princess of Wakanda, and sister to the exiled T'Challa. Shuriri was reunited with her brother when he returned from America following the death of their father T'Chaka defending Wakanda from the Freemen. The assassins had blown up the garden of the Heart-Shaped Herb, putting an end to the legacy of the Black Panther and throwing the nation in disarray.[1]

Shuriri was trying to appease the delegates of the different tribes when the assembly was interrupted by Killraven, who intended to set off explosives. Killraven was intercepted by T'Challa, who had been possessed by Zarathos and became the Ghost Panther. Shuriri disarmed Killraven's bombs while Ghost Panther confronted the villain, later receiving help from the revenant T'Chaka, turned into a demonic panther by Zarthos to assist T'Challa. Following Killraven's defeat, Shuriri attended her brother's coronation as new king.[2]

Like this? Let us know!
Retrieved from "https://marvel.fandom.com/wiki/Shuriri_(Warp_World)_(Earth-616)?oldid=5021581"
Community content is available under CC-BY-SA unless otherwise noted.