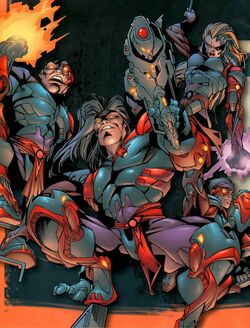 The Cyber-Ninjas were sent by the Kingpin to intercept the X-Men whom were in Hong Kong to prevent anyone from getting Fu Manchu's immortality Elixir Vitae. They fought Shang-Chi and the X-Men, but were defeated in battle.[1]

Along with 14 other terrorist organizations, the Cyber-Ninjas later targeted the Taskmaster to collect the billion-dollar bounty that was put on his head. They were slain along with the other bounty hunters when making the attempt on the bounty.[2]

Retrieved from "https://marvel.fandom.com/wiki/Si-Fan_Cyber-Ninja_(Earth-616)?oldid=5629504"
Community content is available under CC-BY-SA unless otherwise noted.