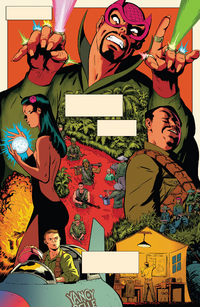 The Siancong War, also known as the Sin-Cong Conflict, was a war that occurred in Siancong and stretched on for several decades as several Asian crime barons manipulated and extended the conflict.[1]

The war began when the small Asian nation resisted communist takeover, and the ensuing conflict soon became international, garnering attention from nations and superhumans from across the globe. The United States of America's armed forces played an especially notable role in the war, and several Marines, Air Force pilots, and scientific allies who would go on to become heroes and vigilantes in the Heroic Age took part.[1]

Over time the focus of the war turned from Cold War-inspired ideological conflict of communism vs. capitalism to a race to lay claim to the elusive "Dragon's Breath", Siancong's primary asset and a mysterious energy around which temples and cults had formed.[1][2]

The war was further extended due to the machinations of "crime barons" The Mandarin and Lady Lotus, as well as those of the warlord Wong-Chu, who had been instrumental in gaining Siancong independence from the French Empire in the first place.[3]