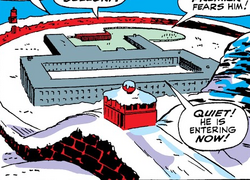 Siberia is an extensive region constituting almost all of Northern Asia. Comprising the central and eastern portion of the Russian Federation.

In Tunguska, on the morning of the 30th June 1908 a mysterious explosion over the sparsely populated Eastern Siberian Taiga flattened 2,000 km2 (770 sq mi) of forest it caused no known casualties among humans.

In 1941, Imperial Japanese forces smuggled into Siberia and attempted to dig a tunnel to Alaska under the Bering Strait in an attempt to invade the United States. However, this plot was discovered by the Human Torch and Sub-Mariner. Namor sent an Atlantean war party in Aero-Subs to attack Japanese forces in Siberia while the two heroes destroyed the tunnel from the Alaska side.[1]

During the Cold War, many communist worker camps were set up in Siberia. In August of 1950, American Secret Service Agent Kent Blake smuggled himself into Siberia to gather evidence proving that these camps existed by allowing himself to be arrested. Kent took notes and photographs at the camp and experienced many tortures before faking his death in order to escape prison and return to the United States.[2] In 1955, Soviet agents captured an American architect to build a tunnel from Siberia to Alaska, even convincing the Sub-Mariner into assisting by tricking him into believing that the tunnel was intended for trade purposes. When Namor learned that the intent was for a Russian invasion, Namor destroyed the tunnel.[3]

In a communist work camp not far from barren Siberia, the new camp commissar Boris Bullski forced some captive scientists to work in the laboratory, which the Crimson Dynamo used to design his armor, to create for him the Titanium Man Armor.[4]

Piotr Rasputin and his siblings, famous cosmonaut Mikhail Rasputin and younger sister Illyana Rasputin, were born on the Soviet collective farm, called the Ust-Ordynski Collective, near Lake Baikal in Siberia. Piotr's Mutant powers emerged at the age of 13. At first, he was content simply to use these powers to aid his family and the other people of the Collective. He was later contacted by Professor Charles Xavier who recruited him to the X-Men.[5]

As the imminent collapse of the Multiverse due to the final Incursion drew near, Eldrac sent Black Bolt back in time to search for Ahura. He arrived in Siberia in the year 1908 and discovered his son was with Kang the Conqueror's time-displaced army. Black Bolt whispered the word "Goodbye.", which leveled much of Kang's fortress, and would come to be known as the Tunguska event.[6]

Sue Storm was shot down over Siberia in a sinister plot from Ivan Kragoff, which the Fantastic Four quickly investigated.[7]

The battle between Captain America, the Winter Soldier and Iron Man took place in a Hydra facility located in Siberia.[8]

Like this? Let us know!
Retrieved from "https://marvel.fandom.com/wiki/Siberia?oldid=6416406"
Community content is available under CC-BY-SA unless otherwise noted.