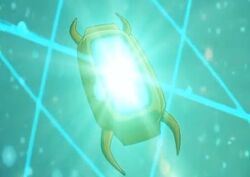 This... thing, Electro, is the Siege Perilous. A mystical key allowing us to enter world parallel to our own.

Originally given to the X-Men by Roma for defeating the Adversary, the intent was to allow the X-Men to start over with new lives if they became overwhelmed by being heroes.[1]

The X-Men had forced the Reavers through the portal after defeating them and taking their Australian Outback base for their own.[2]

Dazzler toyed with the Siege Perilous, and it showed her visions of alternate futures for her, all of which ended in premature death.[3]

Psylocke, Colossus, Dazzler, and Havok later all used the Siege Perilous after saving Polaris from Zaladane. Leaving one of the High Evolutionary's towers in the Antarctic, Psylocke tried to warn the X-Men that to return to the Outback was certain death, when Gateway teleported them back without warning. Psylocke telepathically 'persuaded' the other X-Men to step through the portal rather than face certain death (although none of the X-Men had any hint that the Reavers were back and waiting for them).

The last appearance of this incarnation of the item was in Wolverine's fever dream where he 'saw' the X-Men forced through the portal by Psylocke. Subsequently, when Wolverine woke from his dream to be tortured by Donald Pierce and his Reavers, Pierce smashed the item to dust in his cybernetic hand.

Rogue's new life was in the Savage Land where she teamed up with Magneto against Zaladane.[5] Psylocke emerged in Asia where the Hand found her and switched her body with Kwannon.[6] Colossus became become an artist, and ultimately a pawn of the Shadow King before Professor X restored his memories. Dazzler became a movie star. Havok became a Genoshan Magistrate.[7]

During the Pax Utopia, the Phoenix Five used a device called the Siege Courageous to teleport around the world.[8][9] The exact relation between those Sieges is unknown.

It was found by a man who would become the Philistine with one of his university colleagues, but killed him to keep the Siege for himself.[10] Transformed and defining himself as its agent, he became an associate of Kade Kilgore's Hellfire Academy, looking for the one worthy of its power.[11]

There, it was used to enhance students who're put in detention, in order to make them more menacing. Snot was submitted to the Siege after failing his class exam,[11] as well as Quentin Quire but the latter was rejected by it.[10] As the X-Men made an assault on the Academy to rescue some of their students. Kade in a desperate attempt to maintain control of the situation, ordered the Philistine to drag everyone into the Siege Perilous or to have them all slaughtered.

Much to everyone's surprise however, initially believed that Kade Killgore was the one whom the Siege Perilous sought to be its handler. It was actually Wilhelmina Kensigton instead, who took her leave of the Academy and ordered her new ward to detonate the island with it before exiting.[12]

It is revealed the Siege possesses a semi-sentient consciousness of its own, being able to reach out and touch the minds of those it deems worthy of its power and guidance towards the artifacts own ends. Somehow, Quentin Quire was rejected by the Siege's powers.[10]

Like this? Let us know!
Retrieved from "https://marvel.fandom.com/wiki/Siege_Perilous?oldid=6433206"
Community content is available under CC-BY-SA unless otherwise noted.