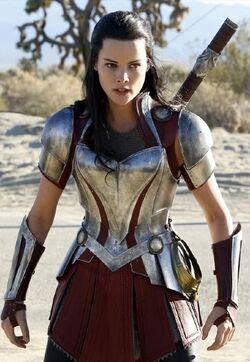 I'll die a warrior's death! Stories will be told of this day!

Sif is a member of an advanced race of beings called Asgardians who were once worshipped as the Norse gods. She is the Norse Goddess of War and close friend of Thor Odinson.

Six hundred years ago, Sif fought against Lorelei when Lorelei mounted an attack on Asgard. During the attack, Lorelei enthralled Haldor, a man that Sif loved, before Sif defeated and captured her.[1]

After Sif, Thor and the Warriors Three incited a battle with several Jotuns, they nearly began a war between the the two races. Odin, deeply disappointed in Thor as the one most responsible, stripped him of his powers and exiled him to Earth. With Thor absent, Sif and the Warriors Three were faced with a dilemma when Loki turned his attention to wresting the throne from Odin, and journeyed to Midgard (Earth) to find Thor. When their search led them to a small New Mexico town where Thor was staying with Jane Foster, Loki sent the Destroyer after them. While Thor was powerless to battle the construct, the Warriors Three and Sif quickly engaged it, Sif leaping from a building's roof to impale the Destroyer through the back of the neck and chest, causing its apparent destruction. The Destroyer's immobility proved to be only momentary, as it revived to hurl Sif bodily away.

Sif returned to Asgard with Thor and the others after he had dealt with the Destroyer personally. She presently parted company with him when he chose to pursue his brother alone.[2]

Following the restoration of the Bifrost, Sif served as a leader of the Asgardian forces working to restore peace to the Nine Realms. Despite Odin noting that she would make a worthy queen, Thor nevertheless remained loyal to his feelings for Jane Foster, with Sif bearing no apparent grudge as she assisted Thor in breaking Loki out of prison to pursue the Dark Elves. Sif's whereabouts during the Convergence are unknown, but after Thor had defeated Malekith, and the Aether now in Asgardian custody, she was tasked to deliver it to the Collector. She, along with Volstagg, delivered the Aether to the Collector. [3]

When Lorelei escaped her prison during the Dark Elf invasion and fled to Earth, Sif pursued her, subsequently allying with S.H.I.E.L.D. and the resurrected Agent Coulson to stop Lorelei's efforts to assemble a new army.

Lorelei eluded Coulson's team, but surprised them by striking at them on their Globemaster aircraft mobile base. Although she was nearly thrown out of the plane after two of Coulson's team fell victim to Lorelei's influence, Sif was able to hang on to the exterior long enough for the airlock to be re-opened, allowing her to return to the plane and defeat Lorelei. She agreed to keep Coulson's survival secret from Thor until Coulson could tell Thor in person, noting as she left that she was honored to have fought by his side.[1]

Arrival of the Kree

A year later, Heimdall detected the arrival of a Kree on Earth, so Odin (presumably a disguised Loki) sent Sif back to Earth to apprehend this newcomer. Sif tracked down her quarry to Faro, Portugal, and engaged him in broad daylight on a crowded pier. Though she managed to damage the Kree's device that allowed him to masquerade as human, Vin-Tak hit her with his truncheon, which erased all memory of her identity and mission, and tossed her into the sea. By the time she made it back to shore, it was nightfall and all she could recall was the word "Kava". She soon came to the attention of S.H.I.E.L.D., and after they reconstructed her last movements and the identity of her quarry, she realized that "Kava" was the Kree word for "keys". This revelation enabled S.H.I.E.L.D. to narrow down the Portuguese city called "Chaves" translating into "keys", where they captured Vin-Tak.

Vin-Tak insisted he was not a threat, and upon their return to the Playground he used his truncheon to restore Sif's memories. Vin-Tak then revealed that he was on Earth due to a Diviner being used. They soon determined that Skye was an Inhuman when she caused a seismic disturbance. S.H.I.E.L.D. moved to protect Skye as Sif pursued her, insisting that she must be taken back to Asgard for protection. However, Skye shot herself with an I.C.E.R. to stop the tremors.

The next day, Sif took a brainwashed Vin-Tak (who was mind-wiped to protect Skye) back to Asgard so he could be sent home.[4]

Lady Sif, alongside half of all life in the universe, later died at the hands of an Infinity Gauntlet-wielding Thanos;[5] but was restored to life 5 years later when the Hulk used the Infinity Stones that he and the Avengers had retrieved from alternate timelines to undo Thanos' work.[6]

Superhuman Strength: Like all Asgardians, Sif is superhumanly strong and possesses greater physical strength than the average Asgardian female. She was able to hold her own against many stronger foes.[citation needed]

Superhuman Speed: Sif is capable of running and moving at speeds much greater than that of even the finest human athlete.[citation needed]

Superhuman Durability: Sif's skin, and muscle tissue, and her bones, are denser than those of a human being, contributing to a proportionately greater mass and high physical durability. She is capable of withstanding great impact forces from Frost Giants and the Destroyer, even taking a shotgun blast to her arm at close range with no sign of flinching, and exposure to extreme temperatures and pressures of Jotunheim.[citation needed]

Superhuman Longevity: Sif has a lifespan far longer than that of a human being. While not truly immortal, she is known to be hundreds of years old.[citation needed]

Regenerative Healing Factor: Sif's body regenerates damaged body tissue with greater speed and efficiency than a human being is capable of. Injuries such as slashes and punctures can fully heal within hours, whereas broken bones can heal within a few days. However, she isn't able to regenerate severed limbs or missing organs. After Sif and the Warriors Three took a severe beating from the Destroyer, she returned to Asgard looking no worse for wear a few moments after the battle concluded.[citation needed]

Sif is a formidable combatant and has received extensive training in unarmed combat and swordsmanship.[citation needed]

Like this? Let us know!
Retrieved from "https://marvel.fandom.com/wiki/Sif_(Earth-199999)?oldid=6445004"
Community content is available under CC-BY-SA unless otherwise noted.