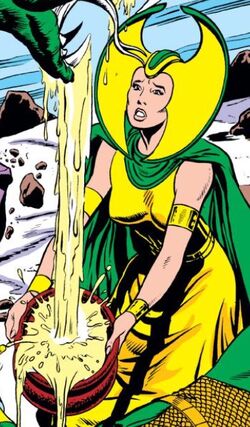 Sigyn was a beautiful Asgardian, engaged to Theoric, a god she loved, and who was member of Odin's guard of the Crimson Hawk.[2]

At some point, Loki sought a female companionship and discovered Sigyn. Offering her jewels, Loki asked her to marry him, but Sigyn was already engaged, and furthermore despised him.[2]

Loki had her fiancé killed by Geirrodur's Trolls, led by Ulik,[3] during a mission and used a spell to take his form. In this disguise, Loki approached Sigyn and provoked in her an even more ardent love, although she had some doubts about "Theoric".[2]

They were eventually wed by Odin himself, unsuspecting.[2]

When Loki revealed his face, Odin tried to annul the marriage, but Asgardian law forbade even the High Father to do so. Thus, Odin could only exile Loki, but Sigyn, in tears, accepted the marriage and decided to go with him. Impressed, Odin declared Sigyn the Goddess of Fidelity.[2]

As she was infuriated by Odin after he imprisoned Loki within a tree, she followed him while he transported the true Donald Blake within Wundagore Mountain. She tried to take control of that human as a threat over Odin, in order to obtain Loki's freedom, but her spell was too weak for Odin's, and Blake was seemingly obliterated. She decided to create a Donald Blake doppelganger to cover her doings, but forgot her wedding band there.[4]

At that point, Sigyn was given a months-long mission out of Asgard for Odin.[5]

In 1000 AD, the Third Host of the Celestials occurred, during which the aliens informed they would return 1,000 years later to judge Earth's right to continue existing. While the pantheons prepared for war, Gaea planned a peaceful solution to the problem with many goddesses, among them Frigga and Sigyn.

For the next thousand years, they searched for humans representing mankind's highest ideals, to be offered to the Celestials as an offering. The goddesses placed the candidates in suspended animation, with their superhuman potential, the legacy of the First Host, awakened.[6]

After Balder was killed by an arrow of blind Hoder under the manipulations of Loki, Sigyn returned and asked to accompany Hoder and guide his arrows during the Ragnarök.[7]

During Loki's trial, Sigyn had to suffer the burden of being the evil's wife,[8] bearing grief for both.[9]

Loki was punished for the murder of Balder to be tied to three rocks and a snake would drip poison on his face. Sigyn refused to abandon him, interceding to Frigga and Odin, she was allowed to help him: She collected the venom in a bowl. However, when the bowl was full, Sigyn had to leave periodically to empty it. During this time, the poison dripped into Loki's eyes, leaving him cursing Sigyn for her failed efforts.[9]

As the forces of Hel stormed upon Asgard, Sigyn returned to partner with Hoder.[10]

While at Loki's side, Sigyn's essence (like all of Asgard's) was used by Odin to power the Destroyer armor against the Celestials.[11]

Sigyn was seen feasting with the Asgardians, reunited with a grim Loki, after Thor had revived the Aesir,[11] but was shackled to him.[12]

At some point back to his punishment, Thor discovered that punishment of Loki and killed the Serpent while Sigyn, at Loki's side, freed him. Loki then lied to Thor, accusing the Frost Giants for his torment and stating they had cut Sigyn's tongue out so she could never speak again.[13]

Loki was allowed to remain in Asgard, sleeping shackled to Sigyn.[5][14]

Infuriated by his chains and his wife guarding him, he revealed that he had acquired the affections of the Enchantress and of Karnilla (allegations she didn't believed), and went to Odin to demand to be released. the All-Father finally did, banishing him to an outpost. Sigyn was left in Asgard and dismissed by Odin.[5]

Loki eventually returned, and when Thor was on trial for disrespecting the rule that no god could dwell Midgard without the consent of the gods' majority, Sigyn came to inform her husband, who faked to at last return her love. At the trial, Sigyn was among those to allow him in Midgard, as Loki enraged at the idea of having Thor locked in Asgard with him.[15]

When Thor accused Loki of having created the Menagerie, Sigyn defended him, as they were still chained to each other.[16]

During his manipulations with Pluto to kill Thor while trapped in the Realm of Mephisto, he entered in contact with Sigyn, faking love again and asking her to be his spy on Asgard.[17]

Pluto and Loki entering in conflict, the Olympian had the Light Elf/Fire Demon hybrid Hrinmeer target Sigyn after having captured Thor. When Hrinmeer revealed his "ugly" face, he manipulated Sigyn's perception for her to see him as ugly, cancelling her chances to win his mercy. While Loki decided to help and sent his astral form, Hrinmeer learned his relation to Sigyn, motivating his murder attempt. Without other means, Loki merged with Thor, for their combined power were able to defeat Hrinmeer and his steed Cerberus, saving Sigyn.[17]

Twilight of another Ragnarök

After the two Thors (Odinson and Red Norvell) went in battle, Sigyn was among the few Asgardians to hear the truth about Donald Blake.[18]

Using her mystic skill, she crafted an armor in which Loki's astral could reside in Asgard, as his corporeal body was destroyed in the process that made him captive of Mephisto's realm[4] and sworn to find a way to give him flesh form again.[19]

Later, she "welcomed" Thor (who had followed the trail of the wedding band he had found in the cavern where Donald Blake was, thinking it to be Loki's) at Castle of Loki, pressing him to leave as he had broken his sacred oath by coming on their grounds. She then encouraged Loki to defeat Thor. While the fight was on, she sent a bird to summon Sif (accompanied by Red Norvell) to end the brawl.[4]

Sigyn then explained her role in the existence of the Donald Blake doppelganger.[4]

Loki soon left her side to fight Thor, considering their truce over.[19]

While Loki has released her from her marital vows, she hadn't forsaken him, and would not as long as she thought he would be worse without her.[20]

Sigyn was seemingly very puritan, as she stated that she could never live outside of wedlock.[2]

Although she despised him,[2] Sigyn, despite reckoning Loki's evil, Sigyn had true love for him. Those feelings made her afflicted[22] and sometimes ashamed.[10]

She remained at his side faithful despite his wrong-doings towards her.[5] In the same measure, she has a great sense of duty, and is faithful and loyal to Asgard, even if that means risking going after her husband.[7]

While she feels shame for any wrong-doings she might do, that shame is diminished when she is driven by love or duty.[4]

Sigyn is skilled in the arts of magic.[23]

According to Loki, Sigyn had her tongue cut out making her mute.[13]

Retrieved from "https://marvel.fandom.com/wiki/Sigyn_(Earth-616)?oldid=6483133"
Community content is available under CC-BY-SA unless otherwise noted.