View source
watch 01:40
Boba Fett Returns - The Loop
Do you like this video?
Play Sound
Part of the Black arc

For no matter how long my shadow grows... I will not be devoured by the black.

Appearing in "Black: One of Five"

Synopsis for "Black: One of Five"

Norrin Radd recalls how he became the Silver Surfer, Herald of Galactus; and in that role he damned countless worlds to be consumed by the World-Eater, becoming seen as an incarnation of Death. In the present, the Black Order creates a black hole to serve as a distraction to steal Thanos' corpse, sucking in dozens of the assembled cosmic heroes. Diving into the black hole, the Silver Surfer ties one of the Rider's chains to Stormbreaker and throws the divine hammer past the black hole's event horizon. To save the remaining heroes, whom he admits should already be dead, the Silver Surfer uses the Power Cosmic to rip apart the fabric of space and time, freeing them from the black hole at the cost of his corporeal form. His power spent, the Silver Surfer succumbs and sinks into the abyss beyond time and space.

Eventually recovering enough to regain corporeal form, the Silver Surfer finds himself drifting aimlessly through the primordial void billions of years in the past,[1] watching as stars are born only to be extinguished. Searching for the source of what is snuffing out the faint glimmers of life, the Silver Surfer senses a dark world at the edge of space and summons his board - traversing the countless light years in a manner of minutes. Arriving on the dark planet, the Silver Surfer is horrified by its eldritch presence - everything black, twisted, and radiating death and antilife. Coming across three towering figures - one a mage wielding a staff, one a knight wielding a sword, and one a warrior with two hammers for arms - guarding a massive Gigeresque door, the Silver Surfer introduces himself, saying he comes in peace, and asks for their help. When asked if they have a master, the figures speak in an eldritch language that the Silver Surfer vaguely recognizes - saying that they serve the Void, their master is a god, and that he is too bright. When the Silver Surfer asks for clarification on what god they serve, the three sentries attack - reiterating that he is too bright.

Drawing upon the Power Cosmic, the Surfer fights back against the three sentries but is caught off-guard by the mage, who blasts him with a torrent of magic and then summons a hand out of the ground to crush him. As the hammer-armed warrior dives towards him and the knight cleaves his board in two, the Silver Surfer breaks free and uses one half of his board to attack the mage and the other to send the knight into the path of the hammer-armed warrior. Leaping towards the mage, the Silver Surfer reiterates that he doesn't want to fight, giving them one last chance to stand down, but the mage quickly teleports the knight in front of the Silver Surfer. Impaled and pinned to the ground by the knight's sword, the Silver Surfer feels the urge to annihilate them and embody death once more but refuses to give in.

The ground suddenly becomes viscous, tendrils of living darkness welling up to engulf and drown him. As a last act of defiance, the Silver Surfer conjures a miniature star. The intense heat burns away the eldritch darkness, revealing a green field, river, and mountains, but the Silver Surfer's hand is tainted by the living abyss and turns black. The three sentries are knocked unconscious and freed from the eldritch darkness corrupting them, revealed to be goddesses from a forgotten alien pantheon. Turning to regard the Gigeresque door, all that remains of the planet's corrupted state, the Silver Surfer notes that what dwells beyond it has the power to enslave gods and extinguish stars. The door slowly opens to reveal a portal of roiling darkness, a distorted and menacing voice greeting the Silver Surfer as a hand covered in living abyss suddenly reaches through and grabs him by the neck.

Pulled through the portal onto a world of eldritch darkness, the Silver Surfer finds himself in the grip of a towering deity with pale skin, long tendril-like white hair, black-and-red eyes, and fangs; clad in black armour with red dragon emblems on its chest and back, and wielding a red-and-black sword. Contemptuously regarding the Silver Surfer, the ancient god of darkness introduces himself as Knull.

Spinning out of GUARDIANS OF THE GALAXY #1, almost the entire galaxy’s defenders have been blown through a black hole, including the Silver Surfer! But the story doesn’t end there… In order to fight back the oblivion, Surfer will have to fight to save his own soul and not lose himself to the void. Follow the Sentinel of the Spaceways on a journey that will change him forever! 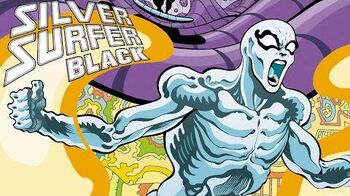