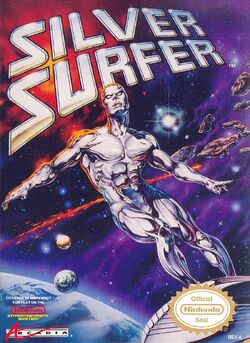 High over the roof of the world he soars... free and unfettered as the roaring wind itself! Behold the sky-born spanner of a trillion galaxies... the restless, streaking stranger from the farthest reaches of space... this glistening, gleaming seeker of truth, whom man shall call forevermore... The Silver Surfer!

Now you can play the part of The Silver Surfer, pitting your surfing skills against the most evil minds in the cosmos. Battle over strange worlds and forgotten realms. Fearlessly fight to defeat the evil plans of the Magik Domain. As The Surfer, you must destroy the five elements that will form the Portal Machine. Only then can you keep the evil Magik Warriors from swarming through into our dimension. You, the streaking Surfer, are all that can stop the Universe from entering an endless age of darkness and distress.

Features of this action game include:

But you must beware, this is one time The Silver Surfer may not make it out alive... The Heralds of Magik, Mephisto, Empreror, Reptyl, and The Possessor, have plans of their own for him... and you.

Retrieved from "https://marvel.fandom.com/wiki/Silver_Surfer_(video_game)?oldid=5872532"
Community content is available under CC-BY-SA unless otherwise noted.