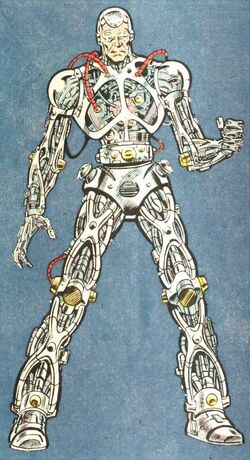 Silvio Manfredi was born in Italy but, as a child, his family emigrated to the United States. The Manfredi's settled in Little Italy, Manhattan.[citation needed]

As a teenager, Silvio Manfredi joined a criminal organization known as the Maggia. With his his cunning and superior fighting skills, Manfredi rose in to the top of the Maggia's ranks. Manfredi later became the head of a "family" (a group of people belonging to Maggia and related to Manfredi not by blood or marriage, but by loyalty). By creating gang wars, he increased the power of the Manfredi family. In the process, he also increased the power of Maggia as a whole, which pleased Manfredi's superiors. Manfredi also married a woman named Catherine and fathered a son, Joseph.[citation needed]

Due to a tax evasion, Manfredi was sent to prison, where he remained for a long time. During his sentence, the power of the Manfredi family was greatly diminished and Manfredi's rivals gained control over his territory. One crime lord in particular, named Kingpin, took the majority of Manfredi's power. Manfredi came to consider Kingpin his own personal enemy, although Kingpin never saw Manfredi as a true threat.[citation needed]

When Manfredi finally got out of jail, he met and allied with a younger maggioso, racketeer Dominic Tyrone, who became Manfredi's right hand man. Together, Tyrone and Manfredi violently regained control over the Manfredi family and turned it into the largest criminal organization on the east coast.[citation needed]

Twenty years later, Manfredi decided that Tyrone had served his his purpose. Manfredi hired thug to assassinate Tyrone. The thug came from an alley and damaged Tyrone's spine with a blackjack blow at the base of his skull, then dumped him into a lake to die. However, Tyrone would survive, and will try to get his revenge.[1]

When he was middle-aged, Manfredi's hair became white, which led to the nickname he came to accept: "Silvermane." [citation needed]

After years of successfully running his crime family, Silvermane realized that he had grown old. Fearing for his life, he began to look for a means to recover his youth.[citation needed]

He heard of an ancient tablet that held the key to create a mystic youth serum. Silvermane found the tablet[2] and then kidnapped Dr. Curt Connors. By threatening Connor's family, Silvermane manipulated him into preparing the serum. Silvermane drank the serum but it had the unintended side-effect of de-aging him into non-existence. Silvermane then mystically aged until he was thirty nine.[3]

Representatives of Hydra with bases in the United States were trying to reform Hydra into a less ideological and more business-oriented organization. They asked Manfredi to become their new Supreme Hydra. He agreed, but only if could retain control of his Maggia family. Silvermane used Hydra resources against his Maggia enemies and turned his Hydra group into a well-organized and well-equipped fighting force. He also hired his son Joseph as his personal aide. Joseph used Hydra technology to become the villain known as Blackwing.[4]

Later, Nick Fury and S.H.I.E.L.D. defeated Silvermane and dismantled his branch of Hydra. Hydra decided to get rid of Silvermane; but they could not execute Silvermane because of his contacts with Maggia. Thus, Silvermane returned to the Maggia and Joseph went with him -- relinquishing his identity as Blackwing.[5]

When he returned to New York, Silvermane tried to organize all of the city's criminal gangs under his leadership. He found opposition in the third Green Goblin, who also wanted to gain control of the New York underworld. Silvermane and the Green Goblin fought, but Spider-Man suddenly appeared. Due to Spider-Man's interference, Silvermane fell from a great height, and, apparently, died.[citation needed]

However, Silvermane survived. Shortly after this, Silvermane was shot by another criminal, the Rapier. Silvermane survived this attempt on his life, but was confined to a bed and a life support system. Also, the shock he had received from his wounds caused a bio-chemical reaction that expelled the serum, turning Silvermane back into an old man. But Silvermane was such a feared leader, that he still managed to keep control of his gang, even in his weakened state.[1]

Crime fighters Cloak and Dagger decided to take down Silvermane because of his role in illegal drug trafficking in New York City. Dagger attacked Silvermane and almost killed him using her powers. However, doctors saved Silvermane's life by transporting his brain, most of his head, and his other vital organs to a robotic body that would also provide him with super-human strength.[6]

The cyborg body had a special mechanism that kept Silvermane alive long enough for doctors to revive him. Kingpin, Silvermane's old enemy, managed to get the body and made a scientist in his employ erase Silvermane's memory. Silvermane was revived, but he was only a mindless, obedient, robotic killer.[7]

However, Silvermane had a psychic bond with Dagger, which allowed Silvermane to retain energy from his lost life force. With this connection, Silvermane could resist Kingpin's orders, and he searched for Dagger. To stop Silvermane, Dagger gave him back his life force. Silvermane, having recovered his memories, escaped from the Kingpin's control.[8]

Silvermane also tried to boost his powers by harvesting parts from super-human bodies, including Spider-Man's, but has always failed. He is still an active boss of the Maggia.[9]

It was revealed that Silvermane's head was still alive at a scrapyard after a gang war with The Owl. His head was found, and taken home, by a young boy who was building a robot.[10]

Like this? Let us know!
Retrieved from "https://marvel.fandom.com/wiki/Silvio_Manfredi_(Earth-616)?oldid=5843682"
Community content is available under CC-BY-SA unless otherwise noted.