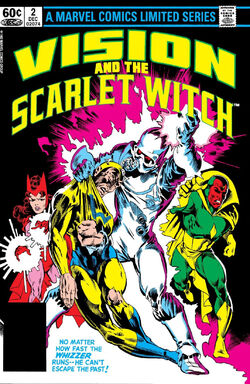 Simon Meke was a mere assistant at a New York museum when he began having aspirations of super-villainy. Inspired by the various ages of man, he developed the criminal identity of Isbisa, the name consisting of the first letter in each age (Iron, Steel, Bronze, Ice, Stone, Atomic). His first crime was an ambitious attempt to steal an atomic bomb. Anticipating opposition from the newly-formed All-Winners Squad, he began plotting a complex plan to prevent them from stopping him in 1945.

First, he recruited various criminals to carry out different jobs that he meticulously planned out for 25% of their gains. In 1946, he then vandalized the ages of man exhibit at the very museum he worked at, issuing a challenge to the heroes to solve a series of crimes based on the various ages. In order to create tension among the group, Isbisa also left a note that made it appear as though the Sub-Mariner was working with him, causing the entire team except Toro to suspect him. While the heroes were busy on their various challenges, Isbisa worked to develop a powerful knockout gas, which he then leaked into the ventilation system. However, just as he entered the facility, the All-Winners Squad arrived to capture him. After the Human Torch and Toro burned the knockout gas from the air, Isbisa was chased up the facilities silo by Captain America, Bucky and the Whizzer. At the top of the silo, Isbisa was nabbed by Miss America and tossed into a nearby river, where he was nabbed by the Sub-Mariner. With his plot foiled, Isbisa was turned over to the authorities.[3][4]

By the time Meke was released from prison in 1949, the All-Winners Squad had disbanded and most of its members either retired or had disappeared from public view. He soon learned that the Whizzer and Miss America had become government agents following the disbanding of the All-Winners Squad and plotted revenge against the super-hero couple. Isbisa sabotaged the nuclear research project that Robert Frank and Madeline Joyce were working at, causing Madeline to be heavily radiated while pregnant with her and Robert's son Robert Frank Jr. This radiation caused their son to become an unstable radioactive mutant that would later be dubbed Nuklo, kill his mother during childbirth, and be locked away in a time capsule until the modern era.

Decades later, in modern times, Isbisa soon learned that Nuklo was in government custody. Under the false identity of Dr. I.S. Bishoff in order to study Nuklo, he then developed a containment suit that could siphon Nuklo's powers, granting him great nuclear abilities. However, Isbisa's plans eventually became threatened the day Robert Frank, the Scarlet Witch and Vision came to liberate Nuklo and place him in Robert's protective custody. "Bishoff" asked to speak to Robert Frank alone, and then revealed his true identity and his involvement in Nuklo's creation and current plot. Siphoning Nuklo's powers, Isbisa then attacked his old foe, seriously injuring him and damaging the Vision. However, the Vision and Scarlet Witch combined their powers to destroy Isbisa's containment suit as he attempted to draw more power from Nuklo, destroying his suit and granting Nuklo stability over his powers. However, Robert Frank had died in battle. Isbisa was then turned over to the authorities.[1]

Isbisa apparently escaped custody again and assumed the identity of Doctor Sanderson and began studying time and space, taking keen interest in what he referred to as the "Fourth Wall". With his students, "Sanderson" focused his devices on a court case where the She-Hulk was trying to prove to the court the existence of aliens and a government cover-up. Sanderson used his device to pull the Venom Symbiote out of time and place it in the court room to attack She-Hulk, tearing off her clothing in order to increase "Fourth Dimensional" interest. When the creature faltered in its attack, "Sanderson" returned it to its proper place in time, then left his students to try out his device. They summoned two temporal versions of the Hulk, his savage green incarnation and his grey Mr. Fixit incarnation. However, the sunlight caused the Grey Hulk to revert back to Bruce Banner, forcing the students to return both Hulks to their own time before the Green Hulk could kill Bruce Banner. These attacks then prompted the She-Hulk to seek out aid from Columbia University, ironically enough calling upon Dr. Sanderson for his professional help. After distracting She-Hulk with a time-displaced Wolverine, "Sanderson" met with She-Hulk and agreed to "investigate" matters for them. However, "Sanderson's" students pulled Spider-Man, who accidentally webbed up "Sanderson" as well as She-Hulk's colleagues Louise Grant and Wanda Mason. Before Spider-Man could isolate the source of the disturbance before being put back in favor of X-Factor's sentient Ship to give "Sanderson" time to free himself from Spider-Man's webbing.[5]

While She-Hulk clashed with Apocalypse and was rescued by time-displaced heroes Iron Man, Thor, Silver Surfer, and Human Torch; Louise Grant (formally the Blonde Phantom) began to recognize Sanderson, but could not place where she met him before. More mishaps involving Hobgoblin, Mr. Fantastic, Sabretooth, Jack O' Lantern, Juggernaut, a Sentinel, Caliban, Rhino, and Armadillo finally made She-Hulk and her companions realize that "Sanderson" was responsible.

She-Hulk then fought her way through the time-displaced opponents and smashed Sanderson's machine, shunting all the criminals back to their proper places in time. Louise finally recognized "Sanderson" as Isbisa. Breaking down, Isbisa explained that he was shunted to limbo due to the fact he was unloved and that he attempted a comeback from the Nuklo affair and created this current ruse to become popular again, that by appeasing the "Fourth Wall" he would be able to remain known. When She-Hulk threatened to throw Isbisa in jail, he refused to surrender and, using a transporter, shunted himself back to limbo, preferring oblivion over incarceration.[2]

Isbisa has not been seen since.

Criminal genius in chemistry, physics and other fields. Not superhuman, but unusually fit.[6]

A costume that released knockout gas in the 1940s, a battlesuit that could absorb and discharge radiation, and an interdimensional observation and retrieval apparatus.

It is important to clarify some of the facts pertaining to Isbisa's appearances in Sensational She-Hulk #29 and 30. At that time the title's primary gimmick was that She-Hulk was self-aware of the fact that she was a comic book character, and she and her supporting cast and villains frequently broke the "Fourth Wall" (that barrier between fiction and the reader) for comedic purposes. Isbisa's discovery of the "Fourth Wall" and desire to appease it is a reference to the fact that Isbisa was an obscure villain from the 1940s.

It is also interesting to point that when Isbisa had a profile in the Official Marvel Handbook they chose to gloss over a lot of these details.

Like this? Let us know!
Retrieved from "https://marvel.fandom.com/wiki/Simon_Meke_(Earth-616)?oldid=6462521"
Community content is available under CC-BY-SA unless otherwise noted.