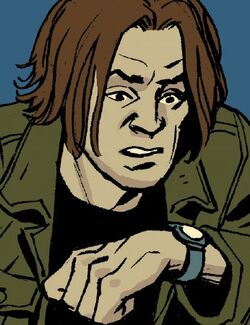 Slug was an apocalyptic zealot handpicked by Ammo to join his Munition Militia. When they prepared to attack the city as part of a plan to kickstart the collapse of society, Slug was to oversee the detonation of the explosive charge inside a truck while the rest of the team caused a diversion in the other side of the city.

Following the defeat of his teammates at the hands of Daredevil, Luke Cage, and Echo, Slug was captured by the heroes when they tracked down the truck. He was subsequently arrested.[1]

As part of a plan laid out by his civilian alter ego of Matt Murdock, Daredevil decided to testify while in costume during Slug's trial. When the remaining members of the Munition Militia broke into the courtroom to break their colleague free, Slug attacked a police officer and pointed a gun on his own lawyer, Mr. Baden. Daredevil stopped him, throwing the judge's gavel at Slug's face.[2]

Like this? Let us know!
Retrieved from "https://marvel.fandom.com/wiki/Simon_Slugansky_(Earth-616)?oldid=5872346"
Community content is available under CC-BY-SA unless otherwise noted.