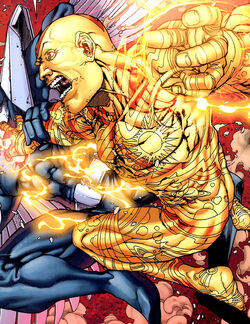 Simon Utrecht was a wealthy but unscrupulous businessman who was obsessed with gaining power. Convincing three others, Mike Steel, Ann Darnell and James Darnell, to go up into space in his privately-funded spacecraft to mimic the power and abilities of the Fantastic Four, who had gained their powers from cosmic rays. Utrecht and his crew passed through a cosmic radiation field, but were interrupted by the Hulk before they finished their experiment. They soon crashed back to Earth, much like the Fantastic Four themselves did. Upon seeing themselves after the crash, the quartet viewed themselves as freaks and monsters. Utrecht in particular blamed The Hulk because he believed with further exposure to the cosmic rays, they could have become "gods." The newly-christened U-Foes attacked The Hulk, which began years of hostilities between them.[1]

The U-Foes became professional criminals, and clashed with many heroes including the Avengers.[2]

Vector, along with the other U-Foes, registered under the Superhuman Registration Act, and served in Norman Osborn's forces, before joining the Hood's Gang.[3][4]

Vector's body has been bombarded with cosmic rays far greater than that of Mr. Fantastic, and since then his teammate X-Ray has once more bathed him in cosmic rays so as to achieve better control over his powers.

Telekinesis/Psychokinesis: Vector possesses telekinetic/psychokinesis abilities allowing him to accelerate, attract, block, and, most prominently, repel matter and energy, directing it away from himself.

Vector possesses the normal human strength of a man of his age, height, and build who engages in moderate regular exercise.

His power can be overcome by sufficiently powerful foes, such as the Hulk, who twice managed to, through extreme effort, bull through Vector's repulsion to physically attack him. An influx of cosmic radiation can cause a temporary loss of control of his powers, as in deflecting the air around him, deflecting his own body from Earth, being deflected into other dimensions. However, this event effectively increased, on a temporary basis, the standard levels of his power.

Like this? Let us know!
Retrieved from "https://marvel.fandom.com/wiki/Simon_Utrecht_(Earth-616)?oldid=6213245"
Community content is available under CC-BY-SA unless otherwise noted.