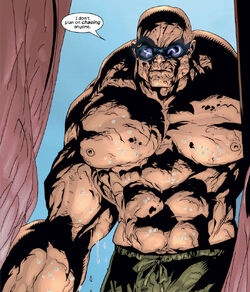 In his pursuit of becoming ruler of the world, Tony Stark devised a way to destroy the Hulk. He succeeded by dropping a high concentration Gamma Bomb on him. Unfortunately, Simon Williams was 20 feet away when this happened, and became an even stronger Hulk.

Tony and Simon came to an agreement to leave each other alone, and Simon lived peacefully with Stephen Strange and Wanda Maximoff. Eventually Weapon X came looking for the key Reed Richards left Williams, at which point he was sucked into the Negative Zone alongside Jen Walters (Another Hulk).[citation needed]

Seemingly those of Simon Williams (Earth-616)#Powers, combined with the Hulk's ability to increase his strength by getting angry.

Like this? Let us know!
Retrieved from "https://marvel.fandom.com/wiki/Simon_Williams_(Earth-42777)?oldid=5147265"
Community content is available under CC-BY-SA unless otherwise noted.