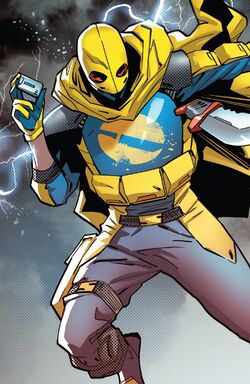 In his public life, Sinclair gives to charity via his Abbott Foundation. During social gatherings he appeared alongside his wife Greta.[1]

As Spymaster, he ordered his predecessor murdered while in prison. He sent the Ghost after Iron Man and attempted to acquire the Living Laser.

Abbott was later enlisted by agents of Mandarin to attack Stark's closest allies. He personally attacked Happy Hogan,[2] leaving him in a comatose state that led to his death.[3]

When Tony Stark revamped his company into Stark Resilient, Justine Hammer hired Spymaster to sabotage him.[4] To this end, Abbott assumeed the identity of Leonard Pimacher. During this time, he developed a relationship with Tim Cababa, and came to love him truthfully. Spymaster saw himself forced to attack Tim when ordered to blow his cover, but avoided killing him.[5] He subsequently attacked Stark Resilient's HQ, and fought against Stark's head of security Bethany Cabe,[6] before being shot down by Bambi Arbogast.[7] Abbott was hospitalized and had surgery. When he regained consciousness, Spymaster attacked one of the officers guarding his bed, performing a suicide by cop.[8]

Abbott appeared to have survived his suicide attempt, and resumed his criminal activities. He came into conflict with Iron Man again after being hired by Baintronics to steal a hard drive containing a back-up of Stark's memories. Spymaster was initially successful and escaped aboard the Manticore, but Iron Man and Captain Marvel gave chase and eventually retrieved the hard drive.[9]

Abbott has no superhuman powers; he wears a Kevlar/Vibranium suit outfitted with various devices and weapons.

Like this? Let us know!
Retrieved from "https://marvel.fandom.com/wiki/Sinclair_Abbott_(Earth-616)?oldid=5610425"
Community content is available under CC-BY-SA unless otherwise noted.