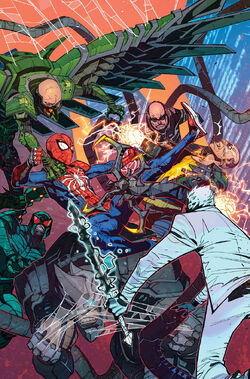 The team was assembled for a short period of time by Doctor Octopus, as part of his plan of revenge on Norman Osborn. Otto released Mister Negative, Electro, the Vulture, Rhino, and Scorpion to wreck havoc on Manhattan, as a form of destabilize the city's trust in Norman's rule.[1]

Spider Man went around the city defeating both Electro and the Vulture in Hell's Kitchen, Rhino and Scorpion near the George Washington Bridge, Mister Negative was defeated on the Oscorp building on Upper West Side, and the last member, Doctor Octopus, was defeated on a epic battle atop Oscorp Tower.[1]

Enhanced suits made by Doctor Octopus save for Mister Negative.

Like this? Let us know!
Retrieved from "https://marvel.fandom.com/wiki/Sinister_Six_(Earth-1048)?oldid=6082965"
Community content is available under CC-BY-SA unless otherwise noted.