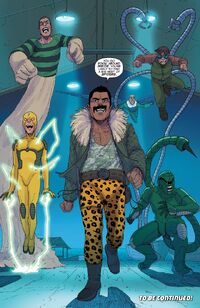 These guys look like psychos and nutters, but I see a dozen non-verbal signals pass between them in positioning and body language. They're not trained soldiers, but they've been battle-forged together. They'll support each other's strengths and compensate for weaknesses.

The Sinister Six was an Ozcorp project designed to tackle the spider-themed vigilantes of Arachnia.[1] The team was composed of foes of the original Spider-Man: Doctor Octopus, Electro, Kraven the Hunter, Sandman, Scorpion, and Vulture.[2]

Norman Osborn sent his team to bring in the Web-Warriors from the Brooklyn Navy Yard. While them initially provoked a fight, they successfully brought them back to Ozcorp Tower. There, the Six were present to see the heroes agree to help Osborn learn of the Web of Life and Destiny.[3]

Shortly afterwards, Osborn would receive a message from the believed deceased Peter Parker and went into a frenzy. He gather the Six; leaving behind Doctor Octopus, to continue his research, and Electro, to watch over the Web-Warriors; to put an end to Parker.[4]

Capturing Parker, they returned to Ozcorp Tower to find that the Spiders caused a feedback loop on a machine connected to the Great Web. Norman took the advantage of all of the spiders being unconscious in the same place to tap into the chair's power, but Peter sabotaged the machine, giving Osborn brain damage. The Sinister Six appeared immediately after the spiders had recovered, ready to destroy them now that Osborn was out of the picture. Spider-Man (Pavitr Parbhakar) threatened the Sinister Six with using the chair to boost their powers, and the villains called his bluff, prompting them to surrender.[5]

Retrieved from "https://marvel.fandom.com/wiki/Sinister_Six_(Earth-22191)?oldid=5594508"
Community content is available under CC-BY-SA unless otherwise noted.