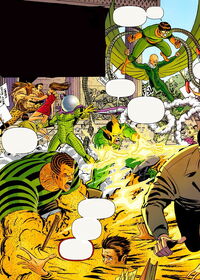 The Sinister Six were hired by the Kingpin to steal a sacred tablet from the college that Peter Parker attended. However, when Peter ran away to change into his Spider-Man costume, a zombie version of Spider-Man, who was transported to their world, took his place and battled the Sinister Six. Spider-Man then proceeded to kill and zombify them. The zombified members of the Sinister Six, except for Sandman, who fled during the battle, killed and ate Spider-Man's friends. They were then killed by Zombie Spider-Man in retaliation.[1]

Retrieved from "https://marvel.fandom.com/wiki/Sinister_Six_(Earth-91126)?oldid=5550470"
Community content is available under CC-BY-SA unless otherwise noted.