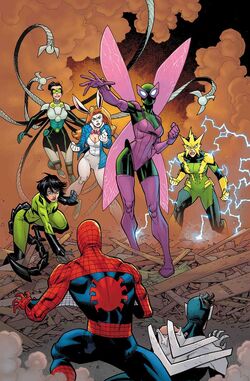 Patterned after the conglomeration of Spider-Man's deadliest foes who call themselves the Sinister Six, the Sinister Syndicate originally was formed by the super-villain Abner Jenkins, aka "The Beetle". The original roster of the group consisted of Beetle, Hydro-Man, Rhino, Boomerang, and Speed Demon, who collectively gathered together under the Beetle's leadership. Unlike the Sinister Six, which was formed mainly to destroy Spider-Man, the Syndicate was formed to act as a mercenary group that worked for the highest bidder.[2]

The Syndicate's, where the group successfully prevented Spider-Man and Silver Sable from capturing famed assassin Jason Macendale, then known as Jack O'Lantern.[citation needed]

The group, now featuring Shocker and getaway driver/Boomerang's girlfriend Leila Davis, were the focus of the 1991 mini-series Deadly Foes of Spider-Man. The four-issue mini-series focused upon the group's break-up due to the Beetle's jealousy towards Boomerang and his attempts to usurp control over the group. Beetle eventually betrayed Boomerang by allowing him to be caught during a robbery and then convincing him to use Beetle's lawyer, not knowing that Beetle had instructed his lawyer to throw the trial to ensure Boomerang's conviction.[citation needed]

As Beetle forges an alliance with the Kingpin, Speed Demon begins a relationship with Leila while Rhino locates a scientist who can remove his rhino-themed body-armor, which had been permanently bonded to his body at the time. The scientist however, owes the Kingpin a large sum of money in unpaid gambling debts, resulting in Beetle killing the scientist. As Shocker helps Boomerang escape jail, Leila betrays Speed Demon and reveals her true purpose for dating Boomerang and involving herself with the Syndicate: Leila was the widow of the super-villain Anthony Davis aka "The Ringer." The Ringer had been kidnapped years earlier by Beetle, who then strapped a (what was ultimately revealed to be fake) bomb to his chest, forcing him to fight Spider-Man. Beetle watched via a camera hidden inside "the bomb" in order for him to observe Spider-Man in action. When Spider-Man defeated the Ringer and exposed Beetle's scheme, Ringer was humiliated and branded a loser by his fellow villains, culminating in his being killed by the Scourge. Leila sought to destroy Beetle in order to avenge her husband.[citation needed]

In the end, a massive showdown ensued between the members with Leila escaping with Boomerang and Rhino, while Beetle went to jail and his loyalist members Speed Demon and Hydro-Man made their own escapes.[citation needed]

Beetle would go on to join the Thunderbolts, assuming the alias Mach-1. However his act of murder from "Deadly Foes of Spider-Man" would cripple the group's attempts to go legit once Beetle and his new teammates broke free from Baron Zemo's control. Beetle would be forced to surrender himself to authorities and plead guilty to murder. Meanwhile Leila Davis would resurface as the new "Beetle", piloting a massive mecha-suit that Justin Hammer had built for Jenkins for when he escaped prison. However, the suit would be Leila's doom, as the villain Graviton crushed the suit with his gravity powers, killing Leila as a result.[citation needed]

When the series was revived in late 2004, Speed Demon ended up joining the Thunderbolts team. However, to his horror, he had discovered that his Sinister Syndicate friend Abner had truly gone legit and as such, came into constant conflict with Abe due to Speed Demon's utter lack of morals and willingness to sell-out his new teammates to the various evil forces that the group fought.[citation needed]

However, years later Boomerang would join the Thunderbolts; unlike with Speed Demon however, no mention has been made regarding Beetle's betrayal of Boomerang in the pages of Deadly Foes of Spider-Man.[citation needed]

Half of the Syndicate (Hydro-Man, Shocker, and Boomerang) reunite and fight Spider-Man. The battle is interrupted by Komodo and War Machine. They were later apprehended by the Initiative's Scarlet Spiders.[3]

The Superior Foes of Spider-Man

Abner Jenkins (now called "Mach VII") reunites with Boomerang as his court-appointed probation officer. Hydro-Man is shown to have a friendly relationship with Shocker (helping him escape a deathtrap), though Hydro-Man was not part of the gang.[citation needed]

Return of the Syndicate

The female Beetle decided to make an all-female Sinister Syndicate, Simply called "The Syndicate".[1] First she recruited four willing super villains, and then used one of them to break out the female Electro from Mayor Fisk's operatives. While Electro did not want to work with her originally, when Beetle showed her the team consisting of Lady Octopus, Scorpia, White Rabbit, and the brand new Trapster, they then attacked Boomerang.[4]

Later, the Syndicate was contracted by Ultimatum to kill the Prowler. Scorpia, White Rabbit, and Trapster ambushed the Prowler and Miles Morales on the streets of Brooklyn. Morales quickly knocked White Rabbit unconscious, but the Prowler suggested that he and Morales should retreat, as they were outmatched. Trapster tracked the pair down and, along with Scorpia, nearly killed the Prowler, but both women were shot with tranquilizer darts from Starling.[5]

Retrieved from "https://marvel.fandom.com/wiki/Sinister_Syndicate_(Earth-616)?oldid=5550486"
Community content is available under CC-BY-SA unless otherwise noted.