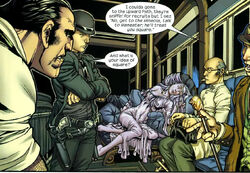 The Sinners were formed by the time traveling couple, the Yorkes in the early 20th century, who established "kingdoms" all across time. This group was to prepare for the war against New York's protectors, the Upward Path. The Swell, leader of the Street Arabs, had collaborated with the Sinners many times. He attempted to enlist the time displaced Runaways into their service. However, they discover that the Yorkes were the real brains behind the operation. Upon learning that their daughter Gertrude was dead in the 21st century, they planned on sacrificing the Sinners to destroy New York with a bomb for the sake of their daughter.[citation needed]

Weapons provided by the Yorkes

Like this? Let us know!
Retrieved from "https://marvel.fandom.com/wiki/Sinners_(Earth-616)?oldid=5550490"
Community content is available under CC-BY-SA unless otherwise noted.