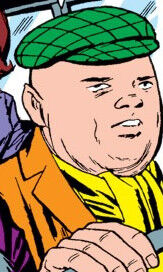 Sir Porga is an evolved pig created by the High Evolutionary as one of his first Knights of Wundagore along with Count Tagar and Bova Ayrshire.[1] Originally trained as am ambassador to humans, Porga was charged by his master to find a teacher from the outside world to educate his fellow New Men, choosing Jane Foster.[2]

When the High Evolutionary created the Man-Beast from an evolved wolf, he was quickly betrayed by his creation and ousted from his citadel on Wundagore Mountain.[3] Porga, along with the rest of the New Men, teamed up with Thor to defeat him and reclaim their home. After the battle, the Evolutionary decided to convert his base into a starship and leave Earth along with his knights.[3]

After settling on an alien planet that they chose to name Wundagore II, the Evolutionary left his New Men alone to develop their own society. Over time, they gave into their animalistic natures and became increasingly more warlike and violent. While attempting to call the Evolutionary for help, Porga was slain by his fellow New Men.[4]

He has also been trained as a liaison to outside human cultures.

Like this? Let us know!
Retrieved from "https://marvel.fandom.com/wiki/Sir_Porga_(Earth-616)?oldid=6433372"
Community content is available under CC-BY-SA unless otherwise noted.