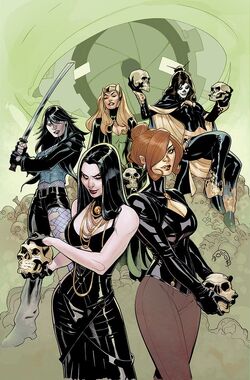 Madelyne Pryor & the Sisterhood Of Mutants

The Sisterhood of Mutants was a group of super-powered female villains, not all of them actually mutants, founded and led by Madelyne Pryor. Each member was offered the chance to have a dead loved one brought back to life in exchange for their services.

Martinique Jason was approached by Madelyne Pryor, who claimed to know all her "sister mutants" and offered her a place in the Sisterhood. Later, Madelyne recruited Chimera in Madripoor and Spiral at her "Body Shoppe", as well as a deconstructed Lady Deathstrike. Madelyne claimed that they would soon make their move against the X-Men. Lastly, Madelyne recruited Regan Wyngarde, promising to resurrect her father.

The Sisterhood captured Psylocke and recovered her original body in which Kwannon died in from Japan. Madelyne then had everyone enact a ritual to restore Psylocke to her original body, while at the same time, subplanting her consciousness with another. Together, they then attacked the X-Men, all to steal a single lock of Jean Grey's hair, which Madelyne could use to locate her corpse and inhabit as her host. However, Cyclops was one step ahead of them, having had Domino replace the body beforehand, causing Madelyne to disappear into the fake. The Sisterhood was then forced to flee, while Psylocke, who had reasserted herself and returned to her Japanese body, left them.

A while after the disbandment of the first team, Arkea formed a second team.[1] Arkea then had Deathstrike and Mary started locating the rest of the team's members. Then Arkea got killed in battle with the X-Men.[2]

Retrieved from "https://marvel.fandom.com/wiki/Sisterhood_of_Mutants_(Earth-616)?oldid=5592012"
Community content is available under CC-BY-SA unless otherwise noted.