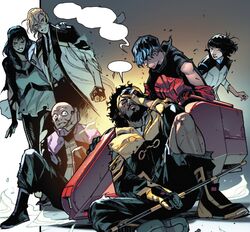 The Six were formed as a part of S.W.O.R.D. to utilize further exploration Mutant Technology. While they are called the Six, that only refers to the main teleporters. They are the first stage of the circuit of this type of mutant technology. While in actuality, an additional five mutants are needed for their specific gifts to ensure the process can work and go smoothly and safely during the second stage of the circuit.

As The Five combine their powers in unison and harmony to achieve resurrection, the Six combine their various types of mid-to-long range teleportation powers and the protection and power augmentation needed by the other members to reach different points in space, be it locally in their native universe, other dimensions, or through the multiverse.

The Six were formed to help S.W.O.R.D to be able to go anywhere they needed or wanted to be. While demonstrating their power to Magneto, they traveled to an unknown cosmic location, stealing a pyramid shaped object called the Mysterium Tremendum.[1]

Retrieved from "https://marvel.fandom.com/wiki/Six_(Earth-616)?oldid=6051850"
Community content is available under CC-BY-SA unless otherwise noted.