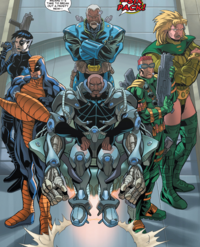 Base of Operations
Underground
Affiliations

In order to understand the current era's threats and obtain finances, time-traveling mutant Cable formed a mercenary group called the Wild Pack. Wild Pack was mostly contracted to Mr. Tolliver, an arms dealer and used Cable's orbiting space station, Graymalkin, as a means of teleporting, or "body sliding", in and out of situations. After a conflict with Silver Sable (who already had a group called the Wild Pack), the junior member of the team, Kane suggested the name Six Pack, while drinking a beer. On a mission in Afghanistan, Six Pack learned that Stryfe, a former enemy of Cable's, was in charge of Mr. Tolliver's opium routes and they were contracted to take out the Soviet armored carriers that were in this route's way. After a brief battle, Stryfe and A.D.A.M. Unit Zero teleported away. Cable scrapped the mission, much to the disliking of the team. Angry, Mr. Tolliver sent agents to kill Six Pack, but they were defeated. On another mission, Six Pack invaded a Hydra research facility in search of a stolen component. Once inside, Hammer accidentally triggered a fail-safe and Baron von Strucker's image appears everywhere, threatening to kill Six Pack, but they quickly retrieved the device and body slid out. Six Pack later found-out that they were working for A.I.M.. Feeling used, Six Pack decided to go after Stryfe in Uruguay. After entering an underground bunker, Six Pack battled their way into a control room, where Hammer began to download secret information from Stryfe onto a CD. While waiting for the disk to finish downloading, Stryfe teleported behind Kane and grabbed his neck, demanding Hammer to give him the CD. Before Hammer could give Stryfe the CD, Cable shot him from behind. Stryfe grabbed the disk telekinetically and set-off a self-destruct on the bunker. Cable teleported away, leaving Six Pack to fend for themselves. Under the rubble, Hammer became paralyzed from the neck down and Kane's arms and legs were severed.

While searching for X-Force, Domino found Grizzly and Hammer and, at the same time, Kane, Cable, and G.W. Bridge had reconciled (after Kane learned Stryfe and Cable's history and spent time in the late 37th-early 39th century, where they enhanced his cybernetic prosthetics). The two groups met at X-Force's, Cable's new team of teenage mutants, Camp Verde base.

Years later, while working for S.H.I.E.L.D., G.W. Bridge reorganized a new team to to aggressively reconnoiter Providence, Cable's floating island utopia, but Cable showed them the city and offered them to stay. Following their failed attempt to defeat Cable, G.W. and Hammer were placed in suspended animation, while Domino "converted" to Cable's side. Solo, Constrictor and Anaconda were hired by Cable and battled the X-Men. After Cable was defeated, by the Silver Surfer, he lobotomized himself and went into hiding. Six Pack found Cable at his Safehouse 14, but got trapped in his mind, which was quickly fading away. However, Six Pack and Cable were eventually saved, by Deadpool and the Fixer, and returned to their bodies.

Constrictor eventually abandoned the group, and was replaced by Deadpool. Later, the Six Pack was hired by the American Government to commit acts of terrorism against the fictional country of Rumekistan, a utopian nation Cable ruled.

The objective was to taint Cable's reputation in a negative light, so as to rumble his secure reign over the country.

Retrieved from "https://marvel.fandom.com/wiki/Six_Pack_(Earth-616)?oldid=5830816"
Community content is available under CC-BY-SA unless otherwise noted.