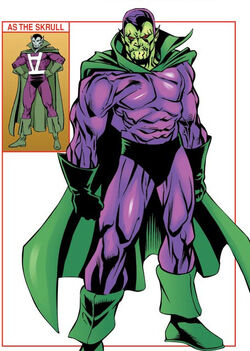 You're not bad, but my people invented shape-shifting!

The Skrulls were locked in an ancient war with the hated Kree. Equally matched, neither race could achieve victory over the other, so the Skrulls began working on methods to improve their soldiers by imbuing them with extraordinary powers to create an army of "Super-Skrulls" to vanquish the Kree. However, before the program passed beyond its first test, Galactus devoured their homeworld, in the process killing nearly the entire Skrull race and leaving a few survivors scattered across space.

Sk'ym'x, the only surviving Super-Skrull, began looking for fellow survivors. He headed to Earth after hearing accounts of UFOs and aliens that may have a lead to his people. Upon arriving, his ship was badly damaged and he was saved by Joe Ledger. Ingratitude, Sk'ym'x gave Joe the Power Prism and the two joined the Squadron Supreme, which Joe became Doctor Spectrum and Sk'ym'x became Skymax. However, Skymax soon resigned from the Squadron after finding no evidences that the Skrulls were living on Earth, but secretly continued to watch Earth under the secret identity of librarian James Doe.[1]

When the Squadron returned from exile on Earth-616, Sky'mx rejoined the surviving original members, alongside Neal Richmond - the son and successor of the team's founder Kyle Richmond, and reformed the Squadron to bring peace back to a world that had turned violent in their absence.[1]

Earth-712 was later visited by Proteus, who tricked the Squadron into believing that his pursuers the Exiles were villains; in which Skymax pitted his skills against Morph.[2]

Able to lift about 5 tons

Like this? Let us know!
Retrieved from "https://marvel.fandom.com/wiki/Sk%27ym%27x_(Earth-712)?oldid=5993721"
Community content is available under CC-BY-SA unless otherwise noted.