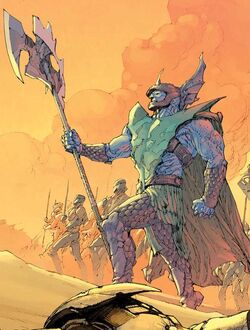 The Skarka Tribe - also known as the Chasm People - are a clan of nomadic Atlanteans who followed seasonal migration routes ranging from Skarka in the Arctic Ocean to the Orreki Reefs in the Pacific Ocean.[5] Due to their nomadic lifestyle, the Skarka Tribe were looked down upon as barbarians by the monarchical Atlantean Empire,[6] and at some point were banished from the Emprie.[7] At some point following their banishment, the Skarka Tribe was enslaved by the bandit warlord Rorak, who sought to exploit a prophecy that a member of the tribe would usurp leadership of the Atlantean Empire; though the young Attuma led a rebellion and freed his people.[8] Despite their freedom, the Skarka Tribe was often forced to resort to banditry when unable to hunt or forge for sufficient resources.[6] Driven into the chasms, the Skarka Tribe fell under the leadership of Attuma's father, Attukar and renamed themselves the "Chasm People".[7]

In the 1930s, the Chasm People entered negotiations to integrate into the Atlantean Empire,[7] but diplomatic talks were interrupted when the Swift Tide - an elite group of Atlantean warrior-women whose ranks included the Skarka Tribe's Garanna the Breaker - discovered the location of the Unforgotten Stone, an eldritch artifact dating back to the time of R'lyeh.[5] Attukar and the representative of Atlantis - General Krang - agreed to send Attuma and the Atlantean prince Namor to accompany the Swift Tide to recover the Unforgotten Stone, hoping to encourage a friendship between the two princes and thus further improve relations between their peoples.[1] However, the expedition ended in disaster, with the Swift Tide being corrupted into monsters by the Unforgotten Stone and going on a murderous rampage through the oceans.[9] King Attukar and the other members of the Skarka Tribe's delegation were slaughtered by the Black Tide, Attuma assuming leadership of his people and blaming Atlantis for the deaths.[10]

Under Attuma's increasingly ruthless leadership, the surviving members of the Skarka Tribe settled in an area of the ocean known as the Murky Depths and began waging war with the Atlantean Empire.[11] When the Fantastic Four helped route Attuma's attempted conquest of the Atlantean Empire,[12] the Skarka Tribe began seeking to conquer both Atlantis and the surface world - bringing them into conflict with the Avengers,[13] Defenders,[14] and other surface-world superhero teams as well.

Eventually, the Skarka Tribe conquered Lemuria as a stepping stone towards conquering Atlantis. However, they were thwarted by the Hulk.[15] When Attuma decided to finally set aside his grudge against Namor, the Skarka Tribe allied with Atlantis.[3]

Like this? Let us know!
Retrieved from "https://marvel.fandom.com/wiki/Skarka_Tribe_(Earth-616)?oldid=6117176"
Community content is available under CC-BY-SA unless otherwise noted.