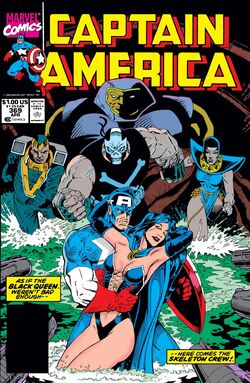 The Skeleton Crew was set up as an organization by the Red Skull. The roster of the team initially included the leader Crossbones, Mother Night, Machinesmith, the Voice, and the fourth Sleeper robot.[1] These members had each repeatedly come into conflict with Captain America and the Avengers. Mother Night's brother, Minister Blood, assisted the Skeleton Crew on their mission against the Avengers.[2]

Crossbones was kicked off the team for questioning one of the Red Skull's commands, prompting a membership drive. Mangler, Deathstroke, and Cutthroat fought for the position at Mother Night's direction, leaving only the latter still alive to join.[3] Later, Blackwing and Jack O'Lantern joined the crew as well.[4] The Skeleton Crew was eventually defeated by Captain America with the help of Diamondback and, after they were stopped, each was sent to prison.[5]

Like this? Let us know!
Retrieved from "https://marvel.fandom.com/wiki/Skeleton_Crew_(Earth-616)?oldid=5550526"
Community content is available under CC-BY-SA unless otherwise noted.