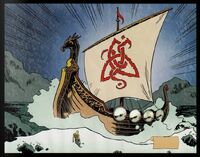 Skidbladnir (literally, "assembled from thin pieces of wood") was a magical ship created by the Sons of Ivaldi, Dwarves of Nidavellir, and brought back by Loki as a gift to Balder.[1]

Later, King Sindri created Skipbladnir as a gift to Thor, which he used to cross the Dark Sea and reach the lands of King Mirmir.[2]

Thor and his future self King Thor embarked aboard the flying ship Skithblathnir to assail Gorr the God Butcher.[3]

Near the end of his life, Cable took Skithblathnir to the the edge of time. He laid on a bed on the deck next to a fireplace and a phone. The Cable and Deadpool from Earth-616 came to Skithblathnir and killed the elder Cable. They took the ship back to their native reality before it teleported into the Sun.[4]

Retrieved from "https://marvel.fandom.com/wiki/Skidbladnir?oldid=5474942"
Community content is available under CC-BY-SA unless otherwise noted.