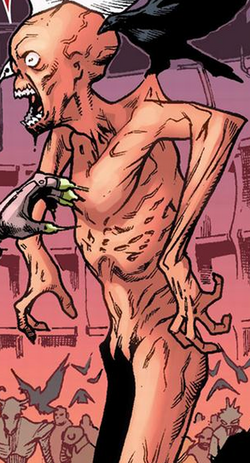 Skinsmith was one of the personalities that David Haller used to battle the X-Men. After being blasted from behind by Chamber, David ordered Sojobo-Tengu and Karasu-Tengu to bring him this personality in order to disarm the X-Man.[1]

Dermis Production: Skinsmith can produce an artificial skin over surfaces. While the exact properties are unclear, it was strong enough to prevent Chamber from unleashing one of his attacks. It could also be pierced with a pen when Beast performed an improvised tracheotomy on it.

Like this? Let us know!
Retrieved from "https://marvel.fandom.com/wiki/Skinsmith_(Legion_Personality)_(Earth-616)?oldid=4246814"
Community content is available under CC-BY-SA unless otherwise noted.