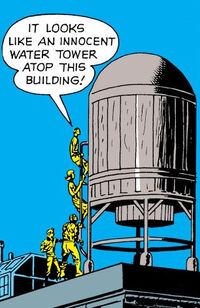 When the Skrulls first came to Earth, they sent down a team of four agents to impersonate and discredit the Fantastic Four. To travel back and forth to the mother-ship in orbit, they used a small skiff disguised as a rooftop water tank. The Fantastic Four used the skiff to visit the orbiting mother-ship and bluff the Skrulls into abandoning their plan to conquer Earth.[1]

It is not certain whether the skiff was originally constructed to look like a water tower, or the engine, avionics, etc. were retrofitted into an existing tower. It is also not certain what became of the ship after the Fantastic Four captured the Skrull agents. Presumably, Reed Richards took it apart to study Skrull technology.

Retrieved from "https://marvel.fandom.com/wiki/Skrull-Ship_(Water_Tower)?oldid=4549207"
Community content is available under CC-BY-SA unless otherwise noted.