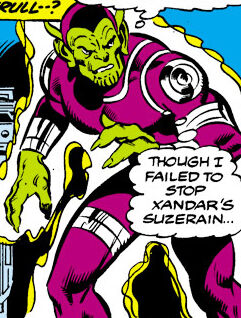 A Skrull-shaped robot created to be the Super-Skrull's superior and successor. Meant to look like a Scout Warrior, he was tasked of scouting out the planet Xandar. He chased after Queen Adora, the planet's ruler, through a transporter that took them both to Earth. Skrull-X encountered the Fantastic Four and was deactivated with a stasis-ray.[1]

Skrull-X eventually reactivated and disguised himself as a machine in the Baxter Building. After learning that the Fantastic Four minus the Human Torch were rapidly aging to death from exposure to a Skrull metabolic ray, he gloated that Earth would be defenseless and be conquered by the Skrull Empire.[2]

As Mister Fantastic, Invisible Girl, and Thing were near death by their rapid aging, Skrull-X attacked the now alone Human Torch. Skrull-X held his own against Torch until Torch's anger was pushed to its limit, and he unleashed his full power, melting the robot in a wall of flame.[3]

Seemingly those of the Super-Skrull of Earth-616.

Like this? Let us know!
Retrieved from "https://marvel.fandom.com/wiki/Skrull-X_(Earth-616)?oldid=5465805"
Community content is available under CC-BY-SA unless otherwise noted.