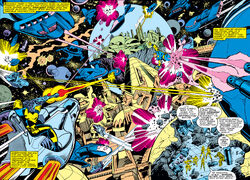 The Skrull-Xandar War[2] was a war fought between the forces of the Skrull Empire, and the planet cluster Xandar and its allies.

The war began when the Skrulls, believing it to be an easy target, invaded Xandar. Within moments, the Skrulls wiped out Xandar's factories and mining operations. Desperate, Queen Adora travelled to an unknown world via an ion beam to seek help. With the robotic Skrull-X in pursuit, Adora arrived at the Baxter Building, home base of the Fantastic Four. After defeating Skrull-X and listening to Adora's story, Mr. Fantastic, Invisible Girl, and the Thing agreed to help. The Human Torch elected to stay behind.

Almost immediately upon reaching Xandar, the trio of heroes was thrust into a fierce battle with the Skrulls. Despite their best efforts, the F.F. were abducted and taken to Tarnax IV, the Skrull homeworld. At a show trial, the trio was sentenced to death by accelerated aging.

The Fantastic Four managed to escape Tarnax IV with a stolen Skrull warship. On their way back to Xandar, a Xandarian ship crewed by Nova, Comet, Sphinx, Doctor Sun, Powerhouse, Diamondhead, and Crimebuster mistook the F.F. for the Skrulls and attacked.

The Fantastic Four survived the assault and joined the crew of the Xandarian ship. The Sphinx and Doctor Sun, detecting the nearby Living Computer, fled to Xandar with the shared goal of absorbing its limitless power. Back on Earth, the Human Torch grew worried and traveled to Xandar. The reunited Fantastic Four, and the remaining Xandarian crew, christened the Champions by Nova, confronted the now god-powered Sphinx. After a one sided fight, the Sphinx flew off into space. Mr. Fantastic formulated a plan: the Champions would stay and protect Xandar, and the F.F. would go after the Sphinx.

Thoran managed to destroy a large percentage of the Skrull fleet. Fearing for his safety Emperor Dorrek ordered a full retreat. Almost as soon as he gave his command, Dorrek was assassinated by his wife, R'Klll, who assumed control of the Empire. R'Klll's first order was to increase their assault.[3][4]

The Champions split into two teams: Comet, Crimebuster, and Diamondhead would follow Thoran to confront the Skrulls, while Nova, Powerhouse, and a contingent of Syfon Warriors would remain on Xandar. While out in space, Diamondhead secretly betrayed his teammates to the Skrulls. Crimebuster was killed, and the remaining Champions and Corpsmen were locked in a pocket dimension.

The Spaceknight known as Rom was searching for his home planet of Galador in a repurposed Skrull Saucer when he flew through Xandarian space. After a brief fight with Nova and Powerhouse, who mistook him for a Skrull, Rom landed on Xandar and witnessed the arrival of the Champions' ship. The crew disembarked and revealed themselves to be Skrulls. Rom instantly engaged the invaders while Nova rocketed into space to find the Corps.

After a fight with Diamondhead that sent him hurtling through space, Nova freed the Champions and the Corpsmen. Returning to Xandar, the combined might of the Champions, the Nova Corps, and Rom finally put an end to the Skrull's invasion. The remaining Skrull troops were rounded up and escorted from Xandarian space.[5]

Retrieved from "https://marvel.fandom.com/wiki/Skrull-Xandar_War?oldid=4676785"
Community content is available under CC-BY-SA unless otherwise noted.