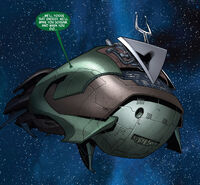 The Ryb'ik was one of many such battleships used by the Skrull Empire during their secret invasion of Earth. It was active shortly before the "World War Hulk" event when it became the vessel to surreptitiously transport the captured Inhuman Black Bolt into Skrull space. Black Bolt was then replaced with a Skrull agent who was soon after incapacitated by an an angry, murderous Hulk bent on revenge.[1] A Super-Skrull agent assigned to the ship was charged with studying and interrogating Black Bolt to learn the secrets of his Inhuman power. Moreover, the Skrulls sought to turn Black Bolt into their own personal weapon to aid them in the invasion.[2]

Retrieved from "https://marvel.fandom.com/wiki/Skrull_Battleship_Ryb%27ik?oldid=5532994"
Community content is available under CC-BY-SA unless otherwise noted.