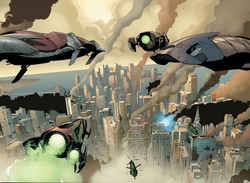 The Imperial Starfleet is the primary armed service of the Skrull Empire. It is a force with 1000s of warships and fleets of varying sizes, some of which have 100s of warships.[2][7] [8][9] The supreme commander of the Imperial Starfleet is the emperor (or empress) of the Skrull Empire. Individual fleets and armadas are led by Generals,[10] Commandants,[2] and Grand Commanders.[5] When the Skrull empire is divided, the various fleets are controlled by governors, warlords, and independent generals.[10][11][12]

It has a wide variety of warships types, including; Frigates,[13] Birds of Prey,[14] Cruisers,[15] Battlecruisers,[16] Dreadnoughts,[11] and Battleships[17]. At the low end in size and capability are ships the size of two-story or multi-story Terran houses, the (Saucers and Deathships). They possess city-sized capital ships that are a mile long or the size of mountains.[18][19][20] In the Skrull fleet the largest and most powerful warships are the Destructor-class, planetoid-sized warships.[21]

Warships of incredible power, with a saucer the size of a two-story Terran house being able to destroy a city with a blast from a single concentrated beam. That had the force of a megaton nuclear blast, powerful enough to the topple the peaks of Himalayan mountains as if they were castles made of sand.[13] Skrull armadas have the ability to turn Earth-sized worlds into balls of hellfire with a single missile or shatter a gas giant planet with two missiles.[13][22][23] The fleet's most powerful weapon is one that can be carried by a single Skrull warship, that burns every planet in a solar system by detonating its star.[24]

Near the end of the Kree-Skrull War, the Skrulls sent an armada to conquer Earth. It was intercepted by the Avengers and defeated. It's commandant Kalxor then attempted to have Earth destroyed with a massively powerful nuclear weapon that would turn the world into cinder, which was intercepted by Goliath.[2]

After Galactus devoured the Skrull throneworld, the Skrull empire fragmented into various factions. The space pirate Nebula invaded Skrull space with a mercenary army, but was finally defeated by the combined forces of the Skrull fleet commanded by general Zedrao and the Avengers.[10]

During the Second Kree-Skrull War, the Silver Surfer and the pirate fleet of Reptyl, fought alongside the Skrull armada in their war against the Kree and their allies the Badoon. The Skrull fleet was personally led by the warlord (and later empress) S'Byll. Several battles were fought in the vicinity of Zenn-La[25]

A massive Skrull armada participated in the attempted Skrull conquest of Earth by Queen Veranke two decades later. Which attacked and seized control of the Peak, landed troops, and waged battle across the planet. They were finally defeated by the combined forces of Earth's military forces (e.g. SHIELD) and heroes (e.g. the Avengers, the X-Men, and the Thunderbolts).[9] The retreating remnants of the invasion fleet led by Grand Commander H'jke Jeeku were destroyed by the pursuing Inhumans.[5]

During the Builders War, the Skrull warlords united under Kl'rt the Super-Skrull who was now one of the warlords. Under his leadership, they joined the inter-galactic War Council and contributed their fleets to the fight against the Builders.[12] Which participated in various space battles, alongside the fleets of the Shi'ar, Kree, Spartax, Brood, and Annihilation Wave, and the Earth's heroes (the Avengers).[26] After the defeat of the Builders, the combined alien fleet assisted the Avengers in liberating Earth from Thanos and his Black Order.[27]

Skrullian warships are equipped with the following types of weapon systems:

Like this? Let us know!
Retrieved from "https://marvel.fandom.com/wiki/Skrull_Imperial_Starfleet_(Earth-616)?oldid=5797007"
Community content is available under CC-BY-SA unless otherwise noted.