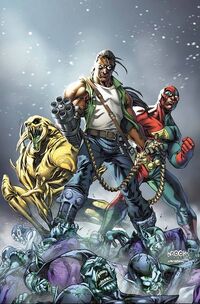 Origin
Group of people having accidentally ate the Skrull Cows's meat at the eatery.

In the early years of their career, the Fantastic Four defeated a group of Skrull spy agents. Mister Fantastic, used their own technology to brainwash them into believing that they are Earth cows, and trapped them in that form for life. The Skrull Cows at one point regained their memories, but one of them is later killed. The remaining three Skrulls were forced to shift into cows and hypnotized into believing they actually were cows, to live out their days grazing in a pasture outside King's Crossing, Vermont.[2][3]

The milk from the Skrull Cows had affected the small dairy town. The Fantastic Four got involved due to Johnny Storm dating one of the residents. They helped the town neutralize the threat.[3]

Skrull Cows were, by accident, sent to a slaughterhouse and butchered as meat. Skrull Cow meat, when eaten by people, transferred the Skrull's adaptable DNA code into the human's cells, resulting in a condition called Skrullovoria Induced Skrullophobia.[4]

The infected individuals gained the ability to shape-shift like a Skrull, but also developed an intense irrational fear and hatred of the Skrull. Only a small number of people were infected, and many did not survive the initial stages of infection. There are several people whose effects proved slower than others (but technically still dying) were recruited into a team by a man named Ryder. Ryder was also victim of the syndrome, as he increasingly had irrational impulses to destroy the Skrull. The Skrull Kill Krew normally attacked the Skrull by blowing them away with large high-powered guns.The Skrull Kill Krew's desire to kill Skrulls not only stopped them from killing people but led them to fight other well known individuals, such as Baron Von Strucker and Captain America.[5]

During the Skrull Invasion, Ryder and Riot met up with Delroy Garrett Jr., the most recent 3-D Man. Learning from him that the Initiative had been compromised by Skrulls, the trio set out to destroy the Skrulls on each team, making ad-hoc members of the remaining super-heroes from each team.[6]

Retrieved from "https://marvel.fandom.com/wiki/Skrull_Kill_Krew_(Earth-616)?oldid=5747049"
Community content is available under CC-BY-SA unless otherwise noted.